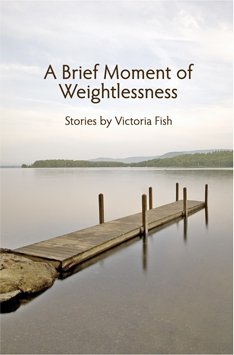 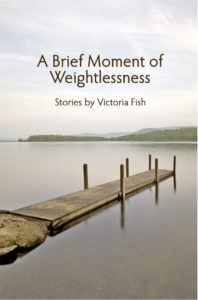 A Brief Moment of Weightlessness is a collection of short stories that illuminate the beauty and extraordinariness of “ordinary” lives. Each explores the human desire for connectedness and grace. The stories range from large upheavals such as how a marriage shifts when a spouse loses a limb or how a girl reconfigures her world when her father goes to jail, to smaller moments such as when a woman experiences wonder again on a visit to a nursing home with her child and their dog, or when a man finds redemption in the midst of tragedy after being bitten by his dying dog. These illuminating, heartbreaking, poignant, astute stories take on serious issues of death/dying, injury, infidelity, aftermath of war, estrangement and more, but without a sense of gloom that could overwhelm them. They often, though not always, find that glimmer of hope or opportunity without feeling forced, and they are told in a voice that can cut to the quick of a character or conflict, with endings that don’t always resolve neatly. If it is the small moments that make up a life, then these stories, explore, dissect and celebrate those small moments that make all of our lives extraordinary.

Praise for Victoria Fish’s work:
Victoria Fish’s brilliant debut collection examines the complexity of relationships. Fish conveys a deep understanding of human nature, in prose both lyrical and powerful, as her characters grapple with the ambiguity of young adulthood, the rivalry between siblings, the loss of a parent, the anguish of being a parent to a child with cancer. As each short tale unfolds, the portent of something ominous urges us to read on, to read just one more, and then just one more.

Fish creates her settings with the luscious detail of the trained writer’s eye. Her characters seem so real we feel we know them — are them — as they face situations we fear and with which we may be all too familiar. — Katharine Britton, author of Her Sister’s Shadow and Little Island

Victoria Fish’s debut collection casts a spell so subtle and sure it could only be the work of a master storyteller. It is this talented writer’s special gift to be able to unmask everyday reality, to distill la vie quotidienne to its essence and surprise us with the familiar. In rendering the struggles of ordinary people—suburban moms and military vets and disdained little sisters—she illuminates the stuff that makes us human, transporting the reader of A Brief Moment of Weightlessness beyond the everyday to the sublime. — Sara Tucker, author of Our House in Arusha

From the story Where Do You Find a Turtle with no Legs?

The shell of the flattened turtle looked like the tile in the bathroom at the county jail, where Maddie threw up the first time she visited her dad. The turtle looked freshly squished. Maddie poked it with the toe of her blue Keds just to see. The turtle had almost made it to the side of the road when its back legs got rolled over by a car. It was so sad. Were there baby turtles waiting in the woods for her to come back? Maddie just knew the turtle was a her.
She wanted to touch the turtle, but Ranger Sandra who visited their 4th grade class once a month as part of Nature’s Classroom warned the students about animal germs and the importance of hand washing. Maddie squatted down, and the pavement breathed heat up on the back of her legs. The turtle’s head was so small compared with its humungous shell. The turtle was way longer than her foot and the shell was at least ten times as big – for the turtle – as her backpack was for her. Would the baby turtles be hungry without their mother? Would a turtle make a good pet? Maddie stood up and walked over to the high grasses at the side of the road and peered…

About Victoria Fish
In addition to writing short stories, Victoria Fish is pursuing her Masters of Social Work. Her stories have appeared in numerous literary magazines, including Hunger Mountain, Slow Trains, Wild River Review, and Literary Mama. She lives with her husband and three boys in the hills of Vermont. A Brief Moment of Weightlessness is her first book. www.vickyfish.com