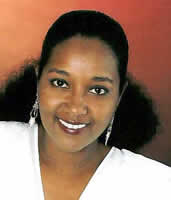 Argelia’s compilation CD, América, is being issued in a professional copy including information about Argelia’s recent activities and performances and the names of the musicians who played on the various cuts.

A few years ago, when Argelia Fragoso burst onto the popular scene, it was the birth of one of the most important musical phenomena to be offered to the international scene by Cuba, the island jewel of Caribbean music. We were confronted by one of those voices whose exceptional gifts are hardly describable in words, earning the attention of critics, composers and musicians.

In addition to a contralto register of great size, warmth and depth, Argelia also possesses that powerful musicality, perfect intonation and clear diction which make her songs a gift for the most exacting ear.

Her artistry is the fruit of many years of study, culminating at the Franz Liszt Conservatory of Weimar, Germany, and has resulted in solid popularity in her homeland and an enthusiastic reception on some of the most important stages in Latin America, Europe and the United States.

Many festivals have been graced by her presence and have recognized her quality with their highest awards. Audiences in all latitudes have applauded her concert performances, both solo and in the company of figures such as Armando Manzanero, Vicente Garrido, the Trio Los Panchos, or Michel Legrand, during her international tours. The musical press has greeted her as “The Golden Voice of Cuba” and “The Lady of Song.”

A versatile interpreter, she is capable of communicating the most varied genres of song to an international audience, from Son to Balada, from Feeling to Bolero, from Lyric to Pop. In whatever form, she delights listeners with her unique and profound voice.

We are honored to assist Argelia Fragoso in reaching your ear.

Argelia Fragoso is available for concerts in the United States.