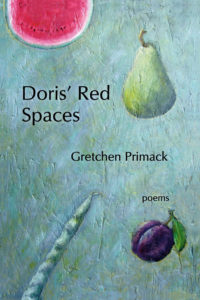 Does everyone have a half-imaginary-friend, half-alter-ego figure walking beside them? That’s what Doris is for author Gretchen Primack. Doris’ Red Spaces moves back and forth between poems from the author’s perspective and those about or in the voice of Doris. The two characters’ attitudes and actions converge and diverge on wide-ranging topics. There are poems that affirm both characters’ desire to not bear children, poems that talk frankly of suicide, poems that explore adolescence, sexual hunger, and grief. The poems’ language, simultaneously sharp and lush, brings the characters to life. “Doris is proud to love the fall,” starts one poem. “I’m tired,” begins another. And a third: “Doris and I walked through with a bright/frog of color at the corner of each eye./We were on our way to the edge/of the earth….”

Says poet Vijay Seshadri, “Primack’s magnetic alter egos, her torrid imagination and unique lexical range, her perfect ear for the spoken voice, and her violently tender human empathy all conspire to create poems that are absorbing both moment by moment and in the long aftermath of remembrance and reflection.” These poems delve to the heart of what drives human beings, whether in relation to one other or alone in our own musings, with honesty and approachability but also with more than a nod to the magical.

Praise for Gretchen Primack’s work:
Doris’ Red Spaces is, in large part, a book of yearnings—the spoken, the nearly spoken, the never spoken. The voices that reside in these pages are, at once, believable and fantastic, which is exactly what, I think, we want from poetry: to be re-familiarized with what life is but simultaneously given the chance to feel ourselves untethered, unhinged, re-conceived for a moment in the good light of savored language. Gretchen Primack’s new poems are a banquet for the hungry soul. -Tim Seibles

When economy of expression combines with imaginative freedom and sheer high spirits, we get poems that surprise, delight, and transport us. That’s how it is with Gretchen Primack’s new book, Doris’ Red Spaces. In poem after poem, she writes to a high standard of excellence, revelation, and dazzling insight. -David Young

These charged, intelligent, often unsettling poems don’t yield an inch to the myths we’ve trusted to describe a woman’s experience. With fierce honesty, Gretchen Primack resists and refuses all that we take for granted––questioning even the life-force itself. And in a delicious paradox, this book, remarkable for its austere vision, revels in mouth-music and the unexpected liberation of song. -Joan Larkin

Doris is proud to love the fall, proving her
hardy as a burr.
Her favorite food is the peanut, which,
when heavily roasted, tastes like bread
and wine and the ground. Her favorite bird
is the grackle, which looks like
an oil spill, hence like an oil spill
survivor. Her favorite grackle picks
pan dulce by the Hotel Antigua pool,
where white women preen their new
brown babies. ¡Que linda! Solo agua pura
para mí. Solo hamburguesa para él.

Doris doesn’t want a baby, she wants a bird
thick with petroleum. She wants a brawny
hippie man with a grackle on each shoulder
and despair buried in his right eye,
craving in the left.

Let me bring you a towel, my dirty sweet,
she would say. Let me spoon warm brown
nuts into you. ¡Que linda! Solo
una nueva vida para mí.

About Gretchen Primack
Gretchen Primack’s poems have appeared in The Paris Review, Prairie Schooner, The Massachusetts Review, FIELD, Antioch Review, Ploughshares, and other journals. She’s the author of a previous poetry collection, Kind (Post Traumatic Press 2013) and a chapbook, The Slow Creaking of Planets (Finishing Line 2007). Primack has worked as a union organizer, working women’s advocate, and prison educator. Also an advocate for non-human animals, she co-wrote The Lucky Ones: My Passionate Fight for Farm Animals (Penguin Avery 2012) with Jenny Brown. She lives in the Hudson Valley. Her Web site is www.gretchenprimack.com.