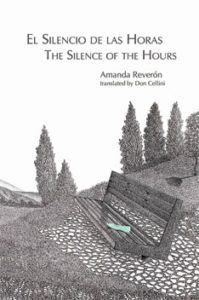 Shipped to Central and Latin America:

Note: You don’t have to have a PayPal account in order to use the PayPal buttons, just a credit card.

Poet Amanda Reverón maintains a blog. Her writing habit is to begin a new book of poems each January 1st and end it on December 31st. The translator discovered El Silencio de las Horas / The Silence of the Hours a few months into the new year. Cellini immediately translated and published three of the poems on-line, but continued to follow the development of the collection throughout the year. He was so taken with the work that he translated the entire book as a gift to the poet.

A single pearl is beautiful and an entire strand is exquisite. In the same way, each of the poems in The Silence of the Hours is a small gem and the entire collection is stunning. In these poems, the poet shares her nostalgia for the past: “there are no birds in the window any more (just me)” and her longings for an unnamed lover: “the hours come undone / I recall memories / after the thickness of your breath”. A single poem may be but a few lines, but the poet carefully evokes the emotion of that moment. In just a few words, she captures the day and then the entire year. The poems are numbered without titles to keep from distracting us from the simple beauty of the poems themselves.

Though the poet and the translator have never met, El Silencio de las Horas / The Silence of the Hours is a book of careful collaboration. The translator has managed to evoke for English readers the same emotions and images as contained in the original Spanish.

Praise for Amanda Reverón’s work:
In El Silencio de las Horas / The Silence of the Hours, Amanda Reverón contemplates the hushed moments of her past and has “left the hours behind…under the fingernails of her childhood”. Don Cellini’s translations nurture the melancholy calm found in the nakedness of memories; this collection is bittersweet in its exploration of the shadows and nostalgia of innocence lost. — Jack Little, Editor at The Ofi Press

“I had to be a mist / or a brief / metaphor of oblivion” says Amanda Reverón by means of the immaculate translation by Don Cellini in the bilingual edition of El Silencio de las Horas / The Silence of the Hours. Cellini captures the essence of the feminine, intricate and strong poetic voice that guides us through the pages, the silence or the mist. This is a book of poetry that the reader will want to read time and time again. — Xánath Caraza, recipient of the 2015 International Book Award for Poetry

The best translations occur when there is a symbiosis or synchronicity between the poet and translator. In El Silencio de las Horas / The Silence of the Hours, poet Amanda Reverón and translator Don Cellini truly speak the same language, visually and imagistically. It is the perfect union of two voices that understand the same poetic vision and its resonance.

Cellini captures the sparse magic in the original Spanish and allows us to hear the same music in English. Laid side by side, these poems “come to terms/with the simplicity of corners/with the minimal gestures.” — Joyce Kessel, Earth’s Daughters