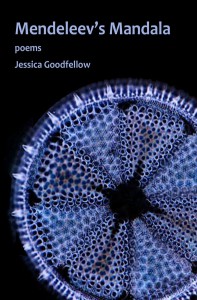 Mendeleev’s Mandala begins in pilgrimage and ends in pilgrimage, but nowhere in-between does it find a home. Logic is the lodestar, as these poems struggle to make sense out of chaos. Jessica Goodfellow reimagines stories from the Old Testament, Greek mythology, and family history by invoking muses as diverse as Wittgenstein, Newton, the Wright Brothers, and an ancient Japanese monk. In the title poem, Mendeleev’s periodic table, sparked by fire and by trains, sees the elements of the world come into focus as a geometric pattern that recalls the ancient mandalas, also blueprints of an expanding universe as a whole.

Throughout this book, Goodfellow uses and misuses mathematics, cosmology, biology, and etymology to push the boundaries of poetic form in a manner that mimics how time and tragedy push the human form to its limits. An examination of the history of clocks reveals that the human body is the ultimate clock. Aging, physical deterioration, and the disintegration of relationships are experienced as a ratio of what can and what can’t be seen—the slow calamity of vision loss, both literal and metaphorical. Yet, despite the gravity of their themes, these poems are often heartbreakingly funny. Vacillating wildly between the consultation of gurus, monks, and fortunes tellers, and the chasing of reason as redemption in the face of impermanence, this book is equal parts wander and wonder. Welcome to the pilgrimage.

Crows Reckoning from Motionpoems on Vimeo.

Praise for Jessica Goodfellow’s work:
This book is a library whittled down to a message in a bottle. Here is a poet who has boldly refused to abide to the expectations of genre—but instead, pushes language and form as a means of asking the most urgent questions. The result is a courageous and kaleidoscopic, at times tender and vulnerable, exploration of motherhood and family—set against the backdrops of science, history, religion, myths, and mathematics. When a poet embarks on a book as myriad and borderless as this one, we are gifted the rare chance to stand at the threshold of a formidable human storm. And from here, it is clear that Goodfellow’s Mendeleev’s Mandala is an electric book. But its lines are not limited to lightning. They move more like thunder, startling, resonant, and suddenly everywhere in the mind at once. — Ocean Vuong, author of Night Sky With Exit Wounds

Jessica Goodfellow has a joyous intelligence and electric tongue. Reading this book a first time, my only regret was that I couldn’t read it a second first time. But then I read it a first second time and a first third. You see what I’m doing? I’m reading this book over and over, without ever completely taking it in. I think you will too. And like me, want only one thing from Jessica Goodfellow – more. – Bob Hicok

From the origin of the number zero to immigration to map making, these poems leap dynamically between ideas and a blazing exploration of language. Folding and unfolding with searing brilliance, these poems reveal our human condition with a down-to-earth sense of humor and wonder. This must-read collection nourishes mind and body and opens up whole new ways of seeing the world around us. – Judy Halebsky author of Tree Line

A crow remembers who crowded it out of the trash can,
who cast at it sticks and rocks and rockets fashioned from bottles.
Long after you have forgotten, the crow remembers your face,
the space between your eyes, the rise of your cheek,
your beakless maw, and with caw both credo and cri de coeur,
the crow causes you to recall that gardens are, by their nature,
not nature, but the cult of cranium over creation,
a human rebuke cloaked in clover and cockscomb and crocus.
A crow says, If a garden is not god-wrung, then who
seeded the Garden of Eden, crux of the human cradle,
till ceded by Adam and even then who, do you suppose,
forespoke the stain of Cain if not a crow, or a murder
of crows.

About Jessica Goodfellow
Jessica Goodfellow has published one book, The Insomniac’s Weather Report (Isobar Press, 2014), winner of the Three Candles Press First Book Prize (2011), and one chapbook, A Pilgrim’s Guide to Chaos in the Heartland, winner of the Concrete Wolf Chapbook Competition (2006). Her work has appeared in Best New Poets and Verse Daily, and on NPR’s The Writer’s Almanac. Her awards include the Chad Walsh Poetry Prize from the Beloit Poetry Journal and the Linda Julian Essay Award and Sue Lile Inman Fiction Prize, both from the Emrys Foundation. Jessica has a graduate degree from Caltech, and currently works at a university in Japan.