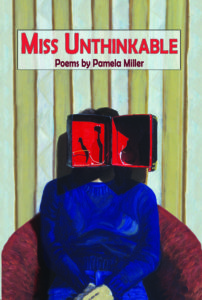 Who is Miss Unthinkable? In this latest collection from Chicago poet Pamela Miller, she’s a shape-shifting sorority of mysterious, funny and wise female characters who don’t let anything get the better of them—from undependable husbands and lovers to breast cancer, aging or even death. The women who strut their stuff in these poems wear “electric sunglasses” and “bracelets of miracles and plagues”; they “thunder up the stairs of desire” and write love letters “juicy as mangoes”; and when confronted with their own mortality, they defiantly “jitterbug with Death in some roadhouse dive,” then “run war-whooping into the light.” In poems that range from the fantastical (“On Our Honeymoon in New York City, My Husband Turns into Times Square”) to the autobiographical (the 11-poem sequence “The Body at Fifty”), this book chronicles and celebrates the resilience of the female spirit with equal parts respect and rowdiness.

Praise for “Miss Unthinkable”
“Pamela Miller’s much-awaited Miss Unthinkable is a gorgeous and rollicking collection of deliciously debunked myth, ferociously female fables and a whole goddess-poet’s host of surreal subversions that I read through in one awed alliterative sitting. (And then I read it again.) The language sparks, contagious and mellifluous; the energy peaks, then peaks again; and the poems read both hilarious and heartbreaking, their enormous range ‘a stagecoach of/noisemakers, a banshee dance to dazzle the dead.’ Miller’s new book is stunning.”
—Maureen Seaton

“Miller has fun with her poems and comes up with the wackiest juxtapositions, liveliest language and wildest similes (‘bleary breasts like the eyes of exhausted yaks’) I’ve ever heard. Reading [her work] aloud is a bit like eating Pop Rocks with a champagne chaser: a series of mini-explosions on the tongue that leaves you lightheaded and happy but with a sense you’ve done something major, and maybe even set a record at it. And there’s no headache—just a hangover of sheer wonder.”
—Kathleen Kirk, RHINO Magazine

“Like life, Pamela Miller’s poetry is more than meets the eye. Her comedy has powerful tragic undercurrents. Her tragedy flows over a bed of comedy. Her world moves in ways that are as unexpected as they are authentic. And nobody chooses words and shapes language better. Great stuff.”
—Charlie Newman

“Miss Unthinkable” reviewed at Prick of the Spindle

In the Midnight Hour
It’s that gluey, torpid hour of the night
when garbage trucks sleep in the town’s pants pocket
and even the cats in heat have cooled down,
dozing like spiky dust bunnies
beneath a porch of sludgy sky.
But here in this vast blue bed, heroic
as “The Bridge on the River Kwai,”
my lips are a movie on the screen of your hair,
they are crazed sailors swarming down
the gangway of your chest,
they’re Pernilla “Bowlegs” Björnssen,
the champeen bronco rider,
just off the boat from Göteborg
but heading for Dodge City fast.
And who are you, sir,
storming my ramparts
with your roller coaster hands and your kamikaze hips
and your moans like chocolate syrup?
Hit me right smack between love’s eyes
like a baseball slammed through Heaven’s picture window,
like the flamethrower voice of Wilson Pickett,
its coruscating whomp and whammy
making midnight last for centuries
as we thunder up the stairs of our desire
and the whole damn Milky Way comes twinkling down to meet us,
unspooling before us its endless esplanade
of wildly applauding stars.

About the Author
Pamela Miller grew up on the South Side of Chicago and had no idea there was also a North Side of Chicago until she was 18. Since making this astounding discovery, she has lived all of her adult life on the North Side, where she has been writing and performing poetry for more than 30 years. Her work has been published in a wide variety of literary magazines and anthologies, including The Paris Review, Pudding, The MacGuffin, Wisconsin Review, Free Lunch, Primavera, Wicked Alice, After Hours, Dangerous Dames, Solace in So Many Words and many others. Her previous books of poetry include Recipe for Disaster (Mayapple Press), Mysterious Coleslaw (Ridgeway Press) and Fast Little Shoes (Erie Street Press). She was won awards from the Illinois Arts Council, the Feminist Writers Guild, the Jo-Anne Hirshfield Poetry Awards, Rambunctious Review and the Frieda Stein Fenster Memorial Poetry Awards. Ms. Miller is married to science fiction writer Richard “Saur Stories” Chwedyk. Her favorite poem of all time is Kenneth Koch’s “Fresh Air.”