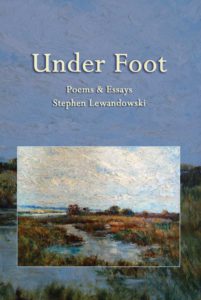 Combine a life-long love of literature, an amateur (loving) interest in and study of Natural History and a professional career in soil conservation, and you will arrive at Under Foot, a book-length series of poems and essays by Stephen Lewandowski.

Under Foot has a strong elegiac feel. Lewandowski’s earlier books of poems (there are ten) are about love and nature. Now, Under Foot brings in death as a third great theme. But Under Foot is anything but gloomy. Instead it develops perspectives—some comic, some serious—on this universal theme and necessity.

If books can be elemental, Under Foot is compounded of earth and water. It looks and roots down through appearances in a search for meaning, akin to Wendell Berry’s Mad Farmer declaration: “What I stand for is what I stand on.” Lewandowski’s poems show us a glimpse of the continuing mysteries right under foot.

Praise for Stephen Lewandowski’s work:
“Here is a sure, durable and unsentimental chorus of poems to love & landscape–or as Steve Lewandowski likes to describe his hills around the Finger Lakes district of western New York State ‘there are / hills upon hills walking / the day away in the woods’–and he may as well be describing himself. Take this book by the hand.”       – Bob Arnold

“These poems are a quiet walk, careful, clear, in the moment, full of nature and desire. Stars, bears, roses and the thorn–‘O Lucky One’ is a story and conversation, a gift of contemplative wisdom.”       – Michael Rothenberg

“I have been following Steve Lewandowski’s poetry for more than 30 years and was delighted to hear that these new poems were about to be published. A poem like ‘Waiting’ has been well worth waiting for, and there are many other fine poems to keep it company.”       – Ted Kooser

“The poems– they reach me; they chime from sympathy”       – William Stafford

“Steve Lewandowski’s poetry draws from the same sure quiet sources as the old Chinese poets of the T’ang dynasty. His work is rooted in the earth of the Finger Lakes and his reverence for that soil would be appreciated by the Cayuga people whose presence is still felt by those who (like Steve) know how to listen.”       – Joseph Bruchac

Like Emerson and Thoreau and other great transcendalists of the 19th Century, Stephen has the gift of sensing spiritual facts beneath the natural facts he sees so clearly and describes so exactly. In each of his poems, he brings us to place and somehow finds a way of showing us the mystery there. […] In many ways, what he does is harder than what Emerson and Thoreau did. When these writers walked out into the forest or looked up at the stars, people still believed that the woods and stars were worth looking at and that in their shadows and brightness some kind of truth lay that could touch us. […] Stephen still has this faith and a way of holding these shadows and lights in his hand so that we can see what he does.”       – John Guzlowski

Traffic tries to evade it when
possible, but it will grab a wheel,
bend a tie rod, bust an axle

In ancient times, the glacier laid
a vein of gravel in among the clays
causing water to rise from the ground
where creatures wore paths through
the woods to the drinking spot
hunters lay at the spring to slake
their thirst and a whole wedding party
pausing in the shade was blessed

About the Author
Stephen Lewandowski has published twelve small books of poetry, and his poems and essays have appeared in regional and national environmental and literary journals and anthologies.

He is a graduate of Hamilton College who later did graduate work with Louis Jones in the Cooperstown Graduate Programs in American Folk Culture and with Howard Nemerov and William Gass at Washington University in St. Louis.

Lewandowski has worked as an environmental educator and consultant in the western Finger Lakes for thirty-five years. He is a founder of the Coalition for Hemlock and Canadice Lakes and the Canandaigua Lake Watershed Task Force. More recently he has been employed as the Program Director of the Lake Ontario Coastal Initiative.

His O Lucky One was published by Foothills Publishing of Kanona, NY in 2010.