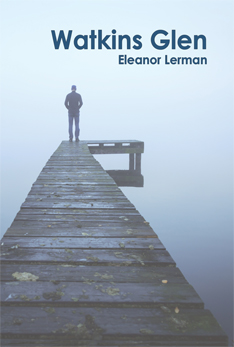 As members of the wild, wandering generation raised on rebellion find ourselves growing older, who do we now understand ourselves to be? Revolution may be in our souls but our lives are now affected by illness, financial concerns, careers that may not have panned out as expected, and a diminishing pathway leading through the years ahead. Watkins Glen is the story of Susan, a woman in her sixties, who finds herself taking care of her estranged older brother, Mark, who has Alzheimer’s. They are the children of a father who worked in his brothers’ upholstery factory for most of the year but in the summers, escaped with his family to Watkins Glen, where he was the best outlaw drag racer in a town that primarily caters to high-end road racing. After a life spent in New York City, Susan has moved back to Watkins Glen where she takes her brother to live—temporarily, she thinks. In the throes of his illness, Mark has developed a rare but well-known symptom of dementia called Acquired Artist Syndrome, whereby people who have never even thought about painting suddenly become obsessed with the art. Once Mark gets to Watkins Glen, he becomes possessed by the idea that there is a Loch-Ness like monster living in Seneca lake and he begins painting the creature. When a stormy season brings mudslides and floods to the region, Mark develops a new obsession—the fear that dredgers brought in to clear the lake after the deluge are a danger to the lake monster, and he wanders around the lake, looking for the lost and possibly injured creature that his sister knows does not exist. And yet, of course, she knows that in a way, it absolutely does.

Praise for Watkins Glen
At the heart of Watkins Glen, Eleanor Lerman’s wonderfully nuanced fifth novel, the burdens of time and place and family converge in the story of estranged siblings, a sister and older brother, reconnecting and coming to terms with a monster. Initially, this a Loch Ness-like monster imagined by the brother, who has developed Acquired Artist Syndrome and spends his days painting a nearby lake, but it’s clear the real monster is Alzheimer’s, the degradation of the brother’s mind set against the rush of time and the sister’s coming to terms with her runaway past and the need to care for her brother. What’s beautiful about this book is Lerman’s sure hand in presenting the stage by stage development through the ordinary human work of loving another—that is, attending doctor’s appointments, paying late bills, being patient with growing levels of violence, of her brother being “there,” then not there. Set in upstate New York, a place their family escaped to so their father could drag race when they were children, fast cars and open stretches of backroads are never far from the main character’s mind where limits fall away and speed and hope and enduring connection (her brother beside her) are possible. — Dennis Hinrichsen

It’s not often one gets to luxuriate in such beautiful prose. Watkins Glen examines the confusions of aging and regret, but also the compelling bonds of family and shared history, however complex and uncertain, and ultimately one of the pure joys life has to offer. — Chris Knopf

With its surety of setting and reflective candor, Watkins Glen is a distinct, intricate novel that avoids sentimentality in favor of a compassionate tone. — Meg Nola – Foreword Reviews May/June 2021

Watkins Glen by Eleanor Lerman is such a beautifully endearing story of family relationships and important lessons about living an authentic life. — Lesley Jones – Readers’ Favorite

When we got home, my brother said he was going to his room to do some work on his paintings and I was grateful, at least, that he didn’t ask me to take him back to the lake so he could work by the last shreds of the light dying on the evening horizon. I went off to the room I used as my office and closed the door so that if Mark walked in, I’d have time to click to a screen that would mask what I intended to do: the joke my friend had made about Googling the Headless Horseman had given me an idea, though it wasn’t ghouls and goblins I was interested in, but monsters.

Fifteen minutes later, I had exhausted all the searches and search terms I could think of and it was pretty clear to me that there wasn’t ever even a whiff of a rumor or a legend about any kind of creature living in Seneca Lake other than trout, trout, and more trout—along with salmon and bass, all the sport fish that brought anglers to the lake in season. There was even a National Lake Trout Derby in May, but the biggest fish that was ever caught in the more than fifty-year history of that contest was under 19 pounds. So, whatever Mark was imagining he saw in the lake was just that—a creature of his imagination, his illness. Maybe “delusion” was a better description of Sennie, but I wasn’t ready to think of Mark’s monster that way because he—She? It?—wasn’t causing me any problems yet. At least, not any more problems than I already had and I hoped things would stay that way, which was as close as I got to saying my prayers that night after I watched a few hours of TV in the living room, then went back upstairs to bed.

I did look in on Mark to say goodnight, but he barely acknowledged me. He was still at his easel and though it was facing away from the door so I couldn’t see what he was working on, I could imagine the scene, which followed me into my dreams: gray water, windy sky, rocky shoreline, whitecaps and waves. Hills and trees all around the lake trapped in its glacial valley. A wilderness in flood, human beings struggling to wrest back control from ancient forces. A brown hump breaking the surface of the deepest part of the lake and the ripples caused by that event, which went on and on and on.

About Eleanor Lerman
Eleanor Lerman, who lives in New York, is the author of numerous award-winning poetry collections, short stories, and novels. She is a National Book Award finalist and has received both Guggenheim and NEA fellowships for poetry. Her novel, Radiomen won the 2016 John W. Campbell Prize for the Best Book of Science Fiction and was followed by The Stargazer’s Embassy (Mayapple Press, 2017) which won an American Fiction Award. Her next novel, Satellite Street (The Permanent Press, 2019), was a finalist for both the Montaigne Medal and the Eric Hoffer Award. In June 2021, Mayapple Press will publish her new novel, Watkins Glen.

when animals are animals – Betsy Johnson