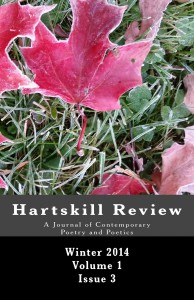 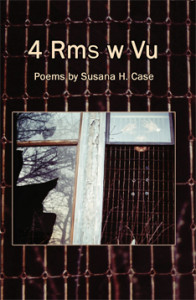 This review originally appeared in the Winter 2014 issue of The Hartskill Review. Subscription details are available at the Review’s website.

Susana H. Case’s 4 Rms w Vu depicts the moments in life when we are most vulnerable. Wrestling with loss whether from death, divorce, or defilement, her poems surpass simple grief and excel in their ability to juxtapose the anguish of loss with a sincere lust for life. Her narrator both laments her tragedies and feverishly clings to moments of passion. “The Red lighter,” while a delightful homage to William Carlos Williams, ends with a moment so tactile it reminds even the most frigid heart of desire:
my catalyst,
the seductive monster-thing
like you
loved by women sharp and loose.
Insouciant flame,
no blame.
So good when you put your hand on mine
—then light it for me. (11)
Physicality and the need to touch run throughout Case’s work and reinforce the idea that the moments of passion are fleeting.

Case rejuvenates her free verse with careful alliteration and unique enjambment. 11er alliteration brings her poetry to an almost auditory level. In the “Year of Our Lost Dog,” she barks, “Blame/becomes a broken object” and in “Adobe Baby,” she links “lust-laced glue—” to make sure her theme of love really sticks. Case capitalizes on enjambment to both finish one idea and catapult the reader to a new level with the next line. “Incantation” illustrates this point nicely with the lines that follow.
Let me age like a good slab of steak, tender
with the mold trimmed. Let me be

a car going 80 miles per hour. Let me reach 80—the exquisite

torture of those many years is compelling. (65)
The line “Let me be” functions well on its own and becomes particularly compelling when paired with the start of the next stanza. Case pushes the definitive statement of existence into the realm of metaphor with the image of the car, The number 80 simultaneously becomes both a speed and an age, and her line break on “exquisite” before the word “torture” exemplifies her constant juxtaposition of lust for life and despair.

Case breaks her collection into four sections, as if one is moving through a house or an apartment, The first two sections are perhaps her most potent, but the latter two do not disappoint. Many reviewers have declared Case’s work a fine example of the New York experience, but to do so overlooks the universal and unifying elements in Case’s works. While she specifically sets some poems in Louisiana, Kansas, and New York, place is usually a jumping off point or an inspiration instead of the sole focus of the poem. For instance in “Still Life with Frogs in Fog”
In most or my memories, you are driving.
Gray damp on our windshield. Traffic,
a lot of it.. Accident ahead. One car,
green, mounting another, blue
—the way frogs mate.
Rayne, Louisiana,
Frog Capital of the World. (35)
The place, and even the accident, functions as a starting point for the narrator to transition to the poem’s main focus which is the decay of the relationship between the two people in the car. Regardless if readers have been to Rayne, Louisiana, Case relates to them with the universal theme of fading love.

Overall, Case creates a unique experience with 4 Rms w Vu that reminds us of our own vulnerabilities while encouraging us to pursue passions with the time we have left.