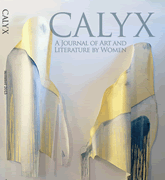 Starting with the first poem in Edythe Haendel Schwartz’s vibrant new collection, readers discover they are experiencing the world through an artist’s eye–and indeed Schwartz is a painter as well as a poet. The striking painting of abstracted figures on the book cover is hers. The title, A Palette of Leaves, refers both to the painter’s palette and, of course, to the fate of leaves–which is, inevitably, to fall. Thus we find the death of a child described as a brush / of fate of fate, lamp black, ochre (“Alice Neel Paints Futility of Effort”).

In this first of three sections, the poems line up clear pigments to illustrate the themes of fragility, sickness, and loss. Poem after poem enlarges the palette: In “Still Water” we get madder, pthalo blue, and cerulean; in “Edward Hopper’s Western Motel…” we get mauve, umber, and amber. Elsewhere in section one the poet offers burnt sienna, Prussian blue, alizarin, and viridian. Even in the poems not specifically about artists, Schwartz paints in colors and lines, appearance and disappearance. As the speaker watches a child at dusk, it is So hard to see / where tree becomes child or child becomes tree (“From Behind The Pane I Watch Her”). Everywhere there is a brilliant vulnerability. As the father reels in and kills a trout, the child observes, The fish has no arms, / can’t raise hands / against the blow (“At the River”).

The second section takes the reader farther afield. We go rafting in Patagonia, watch boys playing soccer in Buenos Aires, look at art in many different cities, lament the tragedy that is Afghanistan, and explore nature in Acadia and Hawaii. While these poems are skillful, they sometimes come across as travelogue, art criticism, or good liberal compassion. Such approaches imply a kind of observer status, an intellectual distance unlike the more intimate and sensory connection of the painter. Perhaps that is why Schwarz’s poems work best for me when they carry her more personal take on what is being painted for the reader. My favorite poem in this group is “July 1943″ where the poet describes her young mother in New York City where Dizzy blew/ his angled horn. With the world rocking under fire, the children heard / our mothers coughing under clouds of Lucky Strikes. Whether or not that is the actual brand Schwartz’s mother smoked, it is the right brand for the iambic final line in wartime.

Section three opens with a strong tribute to the poet’s immigrant father who came to the United States from Romania at age eleven but always claimed he had been born in Brooklyn. When she was six, he drew for her a picture of a cantilevered bridge, a bridge to bear a load, / to sway in wind yet anchor / firm. That bridge still holds (“Suspension”). Throughout this final section of the book, Schwartz gives us pictures of those things that can hold firm, including love. A sparrow flies into a window and someone with a wonky heart holds the stunned bird — your hand erasing air / as if to send the sparrow / on its way (“Reprieve”). Nobody dies today..

The penultimate poem returns to Alice Neel and presents the eighty-year-old artist painting an honest self-portrait: I preface the loss of beauty with glee, writes Schwartz in the voice of Neel,

with mauve, belly folded like a petal, curves
of peach and mango paint connecting flesh
and self. A brush stroke and I can change
all that, but not the truth.

These lines point to the important strength of this unusual book. The poet, a woman no longer young, writes with artistic excitement about the rich palette of her life.

Appropriately, the final poem of the book is “Resilience.” The speaker is walking in the woods with her dog, trips over roots, lands softly in a net of gold and salmon / mulch, a cradle for the old woman / I am growing into. She stands up unhurt and notices the many new mushrooms driving upward / through decaying ferns. Schwartz’s gift is to paint this beautiful, fragile, decaying, self-renewing world.