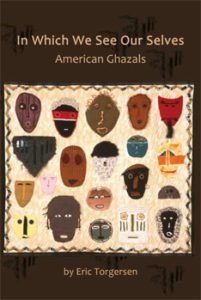 With In Which We See Our Selves, Eric Torgersen begins with the formal structure of the ghazal as popularized by Agha Shahid Ali and unapologetically makes a more American thing of it, arguing in his Afterword that this transformation is as inevitable as what happens when the children of immigrant parents pass through an American junior high school: not everyone is pleased with the result. “I’ve tried to avoid faux-Eastern themes and tones,” he writes. Fluently metrical and effortlessly rhymed, at times in short, hard-hitting lines with refrains as brief as a single word, these poems leap off the page with speech as American as this:
My gang all quit when I didn’t split the take right.
We crashed and burned when I didn’t hit the brake right.
Following the common practice of “signing” the poems in the final couplet, Torgersen allows a chorus of voices—selves?—to speak of, to, for and even against this Eric, this ‘Ric, this Torgersen, this Eric the Derrick, this Torgie. “Back Then,” a tale of a life gone wrong, begins simply:
I was just an average Joe back then.
I had no plans or dough back then.

Family gone, no friends to speak of,
I was feeling pretty low back then.

I started hanging out too much.
I had no place to go back then
Seven couplets later, he signs with his given name, embedded in the name of his country:
America, it wasn’t you.
I did it. Long ago. Back then.

There is wisdom here in Eric Torgersen’s poems, wisdom and also humor (the poems make us feel that it is impossible to have one without the other.) Irony and tenderness—along with wisdom and humor—also move playfully in each other’s company. And all these qualities are brought together under the aegis of a form as challenging to write as it is enticing to read. What joy these poems give and what a pleasure they offer to anyone lucky enough to be drawn into their orbit. – Jim Moore – Author of Invisible Strings and Underground: New & Selected Poems.


In this fine collection Eric Torgersen’s great wit and fine ear turn themselves to the ancient Persian verse form, the Ghazal, and dress it, sometimes hilariously, in American tone and circumstance perfectly fitted to an election year, or any year in our strange and various country. When he writes,

The house, you’ll notice, is on fire again.
We might decide to put out the flame for a change.

Look back. Look down. We’re all alone up here .
Let’s not forget the way we came for a change.

you realize this is a book anyone can read with pleasure and instantaneous understanding even by those determined not to understand. – Christopher Howell – Author of The Crime of Luck and many others.

A grown man now, I do confess to finding
one pose you strike on your new blue yoga mat holy.

I have not one objection to your calling
the old man in the robe and pointy hat holy.

No reason, if it helps you stalk the tiger,
not to call its trim and pungent scat holy.

Would you please shut that squalling monster up
(although in theory I find the little brat holy)?

I still recall how Allen lightened up
the crowd at the reading by saying, “It’s not all that holy.”

Should we agree to stop calling every last thing
that makes our little hearts go pitter-pat holy?

Don’t be so pleased with that so-called self of yours, Eric,
till you call the fires of the Benares ghat holy.

About Eric Torgersen
Eric Torgersen has published six books of poetry, two of fiction, and a full-length study of Rainer Maria Rilke and Paula Modersohn-Becker. He also translates German poetry, especially that of Rainer Maria Rilke and Nicolas Born. He was born in Huntington, New York. He has a BA in German Literature from Cornell University; after two years in the Peace Corps in Ethiopia, he earned an MFA in poetry from the University of Iowa. He retired in 2008 after 38 years of teaching writing at Central Michigan University. He lives in Mt. Pleasant, Michigan with his wife, the quilt artist Ann Kowaleski, whose work appears on the cover. His website is at http://www.erictorgersenpoet.com/