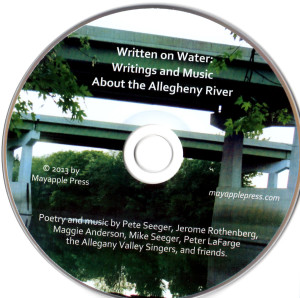 Here are the lyrics (where known) to the tracks from the bonus CD included with Written On Water: Writings About the Allegheny River

Texts for items with asterisks (*) are included in the book already.

4. “As Long as the Grass Shall Grow” written and performed by Peter LaFarge.

5. “You Cannot Step Twice into the Same Stream” written and performed by Francine Sterle. *

7. “Breaking Up Ice in the Allegheny” performed by Mike Seeger. (We have no lyrics for this song. If you know them, please get in touch)

9. “The Invention of Pittsburgh” written and performed by Maggie Anderson. *

10. “A Place with Promise” written and performed by Maggie Anderson. *

11. “Where the Old Allegheny and the Monongahela Flow” performed by Pete Seeger.

12. “A Bodhisattva Undoes Hell” written and performed by Jerome Rothenberg.

* Texts for the items with asterisks are included in the book.

MAGGIE ANDERSON: Maggie Anderson’s poems are from her books—A Space Filled with Movingand Windfall: New and Selected Poems, both from the University of Pittsburgh Press.

R. VIRGIL ELLIS: Since 1982, Ellis has worked with musicians to produce what he calls “fusion poetry,” in which words and music, and often, video, interrelate to produced new meaning. When successful, he says, the effect is deeper than mere “accompaniment.” He has also published books of poetry, including The Blue Train, Recess, Bone Flute, and The Tenting Cantos. His CD’s and DVD’s include Open My Eyes, Lunar Crescent Wrench,
Dangerous Odds, Sing the Poem Electric, and Rough Cuts.

JIM KACIAN: “He’s Here” first appeared in Mariposa 12and the guitar riff is based on Bob Dylan’s “Two Soldiers.” The song refers to the Beaver.

JUDITH KERMAN wrote “Easternmost West-Flowing River” in response to the concept of this anthology. She wrote the song setting and the electronic music background during a residency at Ragdale in 2009. She is the author of eight collections of poetry, most recently Galvanic Response (March Street Press, 2005) and two collections of translations of Caribbean Latina poetry.

PETER LA FARGE (1931-1965) wrote the lyrics for “As Long as the Grass Shall Grow” about the flooding of the Seneca Reservation along the New York/Pennsylvania border for the Army Corps of Engineers flood control project to protect Pittsburgh from flooding. The Allegheny Reservoir/Kinzua Dam violated the treaty of Canandaigua signed by George Washington and promising the Senecas the land for as long as grass shall grow. The song was later recorded and made famous by Johnny Cash.

JERRY ROTHENBERG: “Old Man Beaver’s Blessing Song” and “A Bodhisattva Undoes Hell” are from Penn Sound at the University of Pennsylvania. Rothenberg lived in Salamanca, NY on the Seneca Reservation for two years and was adopted into the Beaver clan.

MIKE SEEGER (1933-2009) was the brother of Peggy Seeger and half-brother of Pete Seeger. He devoted his life to documenting, teaching, keeping alive, and carrying forth the sounds of traditional music of the American South.

PETE SEEGER: “Where the Old Allegheny and the Monongahela Flow” is sung by Pete Seeger, an American master whose music is sung worldwide.

FRANCINE STERLE: Francine Sterle is the author of Nude in Winter(Tupelo Press, 2006), Every Bird is One Bird(Tupelo Press, 2001), and The White Bridge(Poetry Harbor, 1999). Her poems have appeared in such journals as Ploughshares, The North American Review, Poetry International and Nimrod and have been anthologized in Letters to the World , To Sing Along the Way, The Cancer Poetry Project and33 Minnesota Poets.

Pete Seeger – Where the Old Allegheny and Monongahela flow – Lyrics