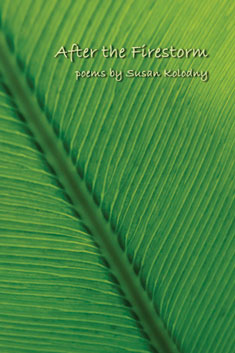 Susan Kolodny draws on her work as a clinical psychoanalyst in her first collection of poetry, After the Firestorm. Kolodny’s evocative style arises from an imagination both sensory and analytical. The poems suggest the unity of love and suffering, and walk a difficult line between the pleasures of the physical world and its dormant, invisible dimensions. Kolodny is a brilliant observer of nature, at once attentive and inquisitive, whose haunting questions provide a starting point for her lyrical investigations into the losses and traumas we all experience.

Praise for “After the Firestorm”
Figuring consciousness not as a stream but as a body of water composed of layers of clarity and obscurity, Susan Kolodny’s wise poems ask “Do we risk more when we look/or when we look away?” It’s this question that weds lyric poet and psychoanalyst, both of whom make shapes that hold experience so that its depths and complexities can be seen into more fully. After the Firestorm not only allows us safe access to “the quieter beneath the quiet,” it also serves as wise, compassionate guide to “a place not human…a place without air,” where “some terror has swum through.” Buoyed by courage and intelligence, these poems move by virtue of a transformative compassion, the “black shadow/in the green water” no longer fear but “a door held open.” I urge the intrepid reader to enter it. – Brian Teare

Susan Kolodny’s poems are gems of evocative perception. Whether she’s presenting a sequence of wrenching sketches at a crisis clinic, or describing the opalescent jewelfish among whom she snorkels in a lagoon, or recalling her final glimpse of a student who will die a few minutes later on the freeway, the grace with which she renders detail and emotional tone demonstrates that we are in the presence of a highly accomplished poet—deft, precise, and thoroughly engaging. – Steve Kowit

Susan Kolodny gives one of the many voices in the title poem its say: “We don’t suspect the griefs that await./ Nor what is dormant, under the blackened earth.” These poems and their author, a psychoanalyst, walk a difficult line between the sensory world and its dormant, invisible depths, where a neuroanatomy student observes, “The dissection proceeds but not/ to the layers we dream from.” After the Firestorm showcases a brilliant observer of the natural world and her haunting, investigatory questions. – Janet Holmes

If what moves you in a poem is the journey of an imagination transformed by passionate attention to the lives of people in big cities and to the living world around them, Susan Kolodny is a poet for you. In other words, if poems move you, read this book. – Brooks Haxton

Along the side of the house, buds
on the peony, the lilac green and sticky.
In the garden, the magnolia blooms pink,
white, and burgundy.
February’s unaccustomed cold revived these,
but stunned the rest. The avocado, brown,
sags against the house. On the trellis,
a thousand dead moths of bougainvilla.
All month, I was up and down
the stairs, my nights
a dialectic of thermometers.
Now January is March. The gardener
hauls away the casualties.
Like small Eurydices, the crocuses,
which this year I turned too late to see,
have gone back into the earth.
I scrutinize my child for illness,
frightening him, scan
the dazed fuchsias for hints of green,
study the resurgence of the lilacs.
Do we risk more when we look
or when we look away?

Susan Kolodny specializes in work with artists and writers. Her previous book, The Captive Muse: On Creativity and Its Inhibition (PsychoSocial Press, 2000) is a study of the psychological obstacles to creative work and the personal qualities and therapeutic work that enable people to surmount these. Kolodny, an urban nature poet, witnessed the devastating Oakland-Berkeley Hills firestorm of 1991, the subject of the title poem of her new collection.