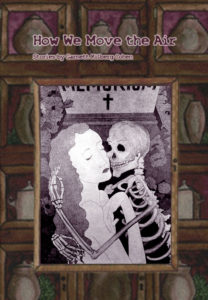 “How We Move the Air” by Garnett Kilberg Cohen is available on Kindle. Click to download from Amazon

How We Move the Air tells the story of musician Jake Doyle’s suicide and how, over time, it affected those who knew him. In seven linked stories, Garnett Kilberg Cohen explores the complex ways in which people choose to remember—or not remember—the past.

Read a review of How We Move the Air in 360 Main Street.

from “Across a Great Distance”
by Garnett Kilberg Cohen

Danny had just opened his hand to release his spare change when he noticed the envelope. His heart paused. He didn’t hear the coins clatter into the snifter. He had been thinking about his brother all day. For the first year after his brother’s suicide, he thought about Jake constantly. During that year, he felt as if Jake was sitting on his shoulder, weighing down his right side. The next few years, Jake moved from sitting on his shoulder to hovering above it a couple of times a day, then a few times a week—at least consciously. When the children were born, Jake faded even more. Yet Jake never vanished entirely. He simply moved from the shoulder to a chair in the far back of Danny’s brain, a silent partner who announced himself in moments of uncertainty or stress. Today Danny had gotten the word that he was going to have to choose two managers to lay off. He knew who the two least productive were, the two least competent—he also knew that both of these people had families, mortgages—and he knew that there were always consequences. The lay-offs might be the beginning of a chain of ripple effects for these people; worrying about where those chains would lead had set Danny to thinking about Jake. What had set him off? What had started the chain that ended with a bullet in his brain? Now this: a letter with his name so clearly printed in Jake’s tight, controlled script that it was almost as if Jake had responded in writing to Danny’s thoughts, as if the piece of mail had fallen directly from heaven to his dresser top. Danny picked up the envelope, standard business sized, cheap, faded with age, though not yellow, simply off-white, fat enough to contain a half dozen folded pages.

“Angie, where did this come from?” His wife reclined backwards on the bed, in just her camisole and panties, her head at the foot, her bare legs propped up so that her heels rested on the headboard. She swiveled around to rise, planted her feet on the floor, and crossed the short alley between the bed and his dresser to look over his shoulder.

“What is it? One of the girls must have brought it up for you.”

“Jake. This is Jake’s handwriting.”

“Noooo, it can’t be,” said Angie, snatching the letter from his hand. “How do you know? Are you sure? It looks like two different people’s handwriting.”
Danny didn’t respond.

“Are you going to open it? It’s probably nothing. You think it’s nothing?”

“They never found a note,” said Danny as he sank back on the bed. Angie sat beside him. Danny slipped the tip of his thumb under a bubble in the seal, planning to tear the fold open. Before he could, the seal cracked, like the spit of his dead brother was too ancient and brittle to do anything except break in response to a human touch.

Garnett Kilberg Cohen’s awards include the Lawrence Foundation Prize from Michigan Quarterly Review, the Crazyhorse Fiction Prize, and four awards from the Illinois Council of the Arts. Her first story collection, Lost Women, Banished Souls, was published by University of Missouri Press. Her writing has appeared in many publications, including American Fiction, Ontario Review, The Antioch Review, The Literary Review, and Other Voices. She teaches at Columbia College Chicago.