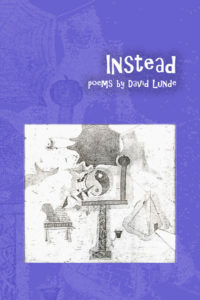 David Lunde’s second title with Mayapple Press, Instead, is a collection of the various ways memory is evoked. Lunde finds similarity between a man and his dog-headed cane, the reconstruction of an ancient building and the uneasy integration of two cultures, and his toddler and a communist country. Each memory is provoked by a singular, vibrant image. Lunde’s craft is one of images woven together with his uniquely whimsical voice.

First Will and Testament
by David Lunde

I give my right eye to hunters
for it sees the death in everything it touches.

I give my left eye to diamond cutters
for it squints at the flawed world through glass.

I give the whirlpools of my ears to the desert
which understands their thirst.

I give my heart to the volcano
for its fitful burning.

I give the plates of fat on my belly
to make a flag for the revolution.

I give my mouth which is already trained
to tell the lies of the revolution.

I give my right hand to actors
for it knows the art of small gestures.

I give the left one to politicians
for it always helps wash off the right.

I give my toes to horses
for they are fingers without ambition.

I give my feet to the highway;
they also have gone two directions at once.

I take my vices to the orphanage;
they will be adopted by others.

I give my work habits to the oyster
whose pain is a pretty rationalization.

I give the scree of my voice to water
that it may be smoothed into song.

I take my tongue with me
for it wishes its tastes to remain secret.

I give my words to the poem
which runs off to make its fortune.

David Lunde has been Co-Editor and Publisher of The Basilisk Press, Contributing Editor of Escarpments, Managing Editor of Drama & Theater, and Poetry Editor of The Riverside Quarterly. He is the author of seven books and chapbooks of poems. His poems, stories and translations have appeared internationally in more than 250 periodicals and anthologies. After many years in Western New York, he moved to Oregon with his wife, the fantasy novelist Patricia McKillip.