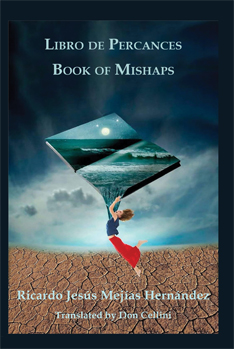 Venezuela is a country in crisis. The economic crisis has produced hyperinflation and prices have risen by more than 6,000%. Millions of citizens do not have access to basic health care and adequate nutrition. Police practices are brutal. With all this happening simultaneously, it’s no surprise that more than 5.5 million citizens have left Venezuela, the largest mass migration in recent Latin American history.

This is the world of poet Ricardo Jesús Mejías Hernández. The poet, however, has taken all the events of daily life and elevated them, has transformed them into poetry. These poems of the struggles of everyday life in Venezuela have risen above the everyday and ultimately won the National Literary Competition IPASME in 2015. Libro de Percances /Book of Mishaps appears here for the first time in English.

In the short poems in the collection, the poet longs for a place of refuge. But he does not die. He does not go into exile. He finds his escape in these poems. Power outages or not, despite whatever inflation surrounds him, he always finds his solace in poetry.

Praise for Ricardo Jesus Mejías Hernandez’s work:
“I walk dressed in the transparency /of silence / my footprints are deep / they step away / with a life of their own / they disappear / between the mist and its tissues” may be the unintended and accurate description of the collaboration between Don Cellini’s translation of the Venezuelan poet Ricardo Jesus Mejías Hernandez’s collection entitled Libro de Percances (Book of Mishaps). The bilingual poems have a musicality in their brevity that a poet like Cellini excavates and brings to light in English. These are poems that invite the reader in to see “territory and shadow” again and again in carefully paced re-readings. — Joyce Kessel

Poetry crosses the earth alone, supports its voice in the pain of the world and asks for nothing—not even words. Ricardo Jesús Mejías brings us closer to his immediate reality, to his pain, which is the pain of all. For this poet, poetry is like the necessary bread of every day, and in these difficult times we must resort to it as a balm, as an elixir, as something indispensable that will help us find beauty with its load of history and memory, with its strength. — Odalys Interián, Cuba/USA

Libro de Percances, by Ricardo Jesús Mejías, is a collection of poems whose theme—or immediate referent—is verified in the anguish of not being in a place, in the anguish of looking for it to rest the spirit. Hence, each text is shadow and light, space and time of the one who pronounces so many times the solitude, the desire to resist that solitude that the text accommodates to the spirit. — Alberto Hernández, Venezuela

About the Author
Ricardo Jesús Mejías Hernández is a poet and short story writer from Venezuela (Maracay, Aragua, 1968). He is a public accountant who graduated from the Universidad de Carabobo (1996). He has published the poetry collections Poemas del oficio y otros vuelos (Sur Editores, 2013), Iluminado en la sombra1 (Negro Sobre Blanco, 2014), El Vocerío de los locos (Negro Sobre Blanco, 2015), Libro de Percances (Fondo Editorial Ipasme, 2015), as well as the book of micro-fiction Cirque (Negro Sobre Blanco, 2014). He is the winner of the Premio Nacional de Poesía Delia Rengifo (Caracas, 2011), of the II Concurso Mundial de Ecopoesía 2012 (Tumbes, Perú) and of the Premio Nacional de Literatura Ipasme in the category of poetry (Caracas, 2015). In addition he won second place in poetry in the III Concurso Por una Venezuela Literaria (2013) and special mention in micro-fiction in the IV Concurso Por una Venezuela Literaria (2014). His poems and stories appear in numerous anthologies in Venezuela and internationally and have been published in the cultural supplements Poemas Contenido del diario El Periodiquito (Maracay), on the site Las Voces del Silencio and in the journal Astrolabium from Argentina.

Don Cellini is a teacher, poet, translator and photographer. He is the author of Approximations / Aproximaciones and Inkblots both collections of bilingual poems published by March Street Press. His book of prose poems, Translate into English, as well as the bilingual collection Candidates for Sainthood and Other Sinners / Aprendices del santo with Fer de la Cruz, and his translation El silencio de las horas / The Silence of the Hours, are all published by Mayapple Press. A chapbook, Stone Poems from FootHill Publishing, was recently translated by Carmen Ávila and published in Mexico as Piedra poemas. His translations and poems have appeared on the website of the Academy of American Poets in The Cincinnati Review, Reliquiae, Manoa and other print publications.

A recipient of fellowships from the King Juan Carlos Foundation and the National Endowment for the Humanities, Cellini is professor emeritus at Adrian College. He is the translations editor for The Ofi Press, in Mexico City.
You can see more of his work at www.doncellini.com