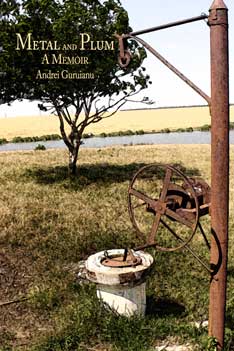 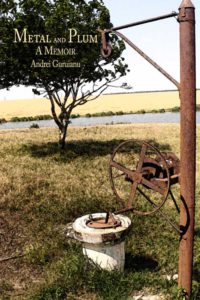 “Metal and Plum: A Memoir” by Andrei Guruianu is available on Kindle. Download from Amazon here

Metal and Plum: A Memoir by Andrei Guruianu reviewed at New Pages

Soccer balls putter down dusty streets, classmates forage through dumps for toys, while friends carry on inexplicably hopeful conversations in bread lines. This extraordinary memoir captures cultural dislocation and hope. Guruianu eloquently conveys the impact of immigration on his family, contrasting the hardships of Ceausescu’s Romania with the challenges of adaptation to the United States. But in the end it is Guruianu’s lyrical and earnest voice that hits home in Metal and Plum, titled so aptly for its juxtaposing of unlike worlds and how much it hurts the heart when you go home and find that the place you knew is no longer there.

From “Fishing for Carp on the Susquehanna”
by Andrei Guruianu

I am sitting on the banks of the Susquehanna River as it winds through green hill country just north of the Pennsylvania border in a New York town that’s breathing the last gasp of a one-time miracle.

Abandoned factories where people once believed in purpose have left in their wake brown fields, carcasses without a pulse. At times there is little to distinguish this place with its burned out shells from the drab projects where I was born in Bucharest in 1979.

This was Indian country once, but the names of towns are now the only relics of that native claim. This is the underbelly of Americana, the dream that Hollywood won’t sell overseas to people like my parents who leave their lives behind for promises. When people ask, I call this place by the river home, hope that the ghosts at the bottom of this grave won’t mind. Hope they will understand the way suffering remains long after the pain is gone.

I watch the water just as the dawn is beginning to settle, see the banks and overhanging trees reflected in its waves. Under there, beneath the Corning glass face of this long bending river, the mud is ugly and black. Blacker even than that, than a night without the smudge of falling stars.

With arm cocked back I cast my line in a smooth, whispering arc, slice the air with a round, invisible edge. When the lead breaks the surface it sinks with a wet slurp, is swallowed by water that ripples and caves in on itself. Along the bottom, the river is full of fat carp, brown bellies sliding along dirt and clay. Garbage fish, shit eaters that no American will touch. Fish that I take home with me and clean the guts and blood and scales out on the driveway then wash away with buckets of water clear as sky pulled from the tap.

No one will eat those fish because they’ve found dead bodies in the water. But a river cleans itself, I want to tell them. It swallows what is dead and dying and keeps on pouring along toward its own inevitable end, taking the dirt and trash we all unload like burdens off our shoulders. It takes the shape of wind and always returns. And just like this water I also long to return, find a way to where I belong. Just like the water I have long to go and much in the way.

I used to mock the thought of going back to Romania when I was a young boy, wanted nothing of the place where I took my first wobbly steps. What else could I do when people called it backward and poor, when they said communists had no place in America. What does a ten-year-old boy know of the loaded meaning of home, of what his parents meant when they used one word to cover it all, dor-love, passion, desire and sadness, a painful longing for a place so familiar it feels like another limb? The word has no single translation in English, no easy way to go home.

Andrei Guruianu is Assistant Professor of English at North Central College in Illinois. He is the author of three poetry collections, And Nothing Was Sacred Anymore (March Street Press, 2009), Front Porch World View (Main Street Rag, 2009), and Days When I Saw the Horizon Bleed (FootHills Publishing, 2006). Guruianu is also the founder of The Broome Review and served as the first Broome County, NY, Poet Laureate. More at www.andreiguruianu.com

The Doors of the Body – Mary Alexandra Agner