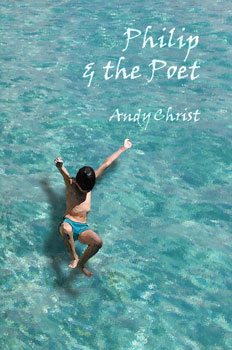 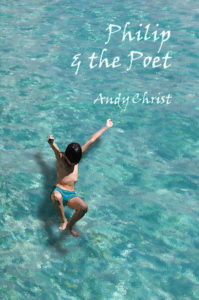 These humorous, moving and sometimes even philosophical poems revolve around Christ’s love for writing, his exploration of faith and knowledge, and above all, his admiration for his audience. An adventurous journey through Christ’s imagination.

Read a review of Philip & the Poet in 360 Main Street.

Contras in the News
by Andy Christ

I was fourteen or fifteen.
I was reading a Sunday paper –
the Cleveland paper – about Contras in Nicaragua.
Interesting, I thought, and waited
for the paper to be thrown out.
My father saw me cutting out the article –
“What are you doing?” he asked,
recognizing something in me
he hadn’t seen before.
I played innocent: “It’s interesting.”
“We don’t have any intellectuals in this
family,” he announced. Then, looking at me,
“at least none that I know of.”
I met his eyes with mine and kept quiet.
Lately I’ve been reading Chomsky’s
On Power and Ideology, and I’d like to
talk to my dad about it, but I really don’t
know how.

Andrew Christ was born in Buffalo, New York, on October 6, 1966, but not raised there. A Midwesterner all his life, he now lives in Midland, Michigan, where he has produced several videos that feature poetry for public-access television. Andy is active in the Friends of Theodore Roethke Foundation, and the River Junction Poets. He served as President of the Poetry Society of Michigan from 2008 to 2010.

The Sky Over Walgreens – Chris Green