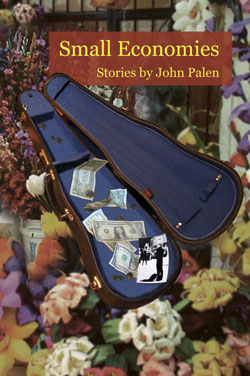 Small Economies’s short stories and flash fictions are economical in narration but comprehensive in their suggestion of the past, present, and future lives of their characters. The moments they contain are set against the background of diverse public spaces: the institutions, stores, factories, restaurants, even the street corners where people must come together and choose to serve, reject, or compete against one another. Palen writes with a poet’s sensitivity to language and the physical, as well as empathy for all of his characters. The stories convey his clear conception of the sometimes devastating outcomes produced by the exchanges, material and intangible, people make and fail to make.

Palen has recently been published in Lingerpost, Citron Review, and Poydras Poetry Blog, and his full-length poetry manuscript, Mnemosyne’s Tenor Sax, was a finalist for the Washington Prize from The Word Works.

Roxane Gay, Lania Knight and John Palen will read from their works in the 8 p.m. event. Jeff Arrigo will sing and play guitar. There is no cover charge.

Gay, who teaches at Eastern Illinois University at Charleston, is widely published. Her book Ayiti came out in 2011 from Artistically Declined Press. She has work in several anthologies and recent publications in Mid-American Review, Midwestern Gothic, Big Muddy and elsewhere.

Knight, who also teaches at Eastern, is the author of Three Cubic Feet, a novella from Main Street Rag. She has published stories and essays in PANK, Midwestern Gothic, and Jabberwock Review.

Palen’s latest book is Small Economies, a short-fiction chapbook from Mayapple Press. His Open Communion: New and Selected Poems came out in 2005, and he has recent work in Citron Review, Lingerpost, The Cossack, Sleet, and Poydras Poetry Blog.

Arrigo is a co-founder of the CU Singer-Songwriter Collective and helps with fundraising for the CU Folk & Roots Festival. His first CD is titled Gideon.

Read a review of John Palen’s Small Economies by David Ball at readbuzz.com

Oh, my God! Oh, my God! he said, a small, dark-haired boy in an untucked shirt. He ran careening out of the hallway toward the sanctuary. Have you lost your cello, Simon? the teacher asked, walking behind him on long legs. Simon hadn’t known she was even there, hadn’t realized he was talking loudly enough to be heard. No, he said, and ran on, not waiting to explain that the cello was lying on a pew where he’d left it after dress rehearsal, nor that he was practicing Oh, my God! because his mother had said it over and over on the phone that morning. He didn’t know to whom, some part of her life on the other end. He thought she was surprised, a little worried but not too much, maybe putting the other person on a little. He tried to get just her same tone.

He remembered to grab the cello below the scroll and the bow at the frog. Only a little taller than the instrument, he dodged up through parents to his wooden stool and sat down. The teacher worked her way toward him, tuning cellos while the pianist sounded an A and paused, and then another. As he waited, his thoughts returned to the hallway. Some day, when he had people in his life who would call, he would need exactly that way of talking. He wanted to be as ready as he could. Things were bound to happen.

John Palen has published seven books of poetry, most recently Harry Truman All the Way, from Pudding House, and Drizzle and Plum Blossoms: Four Poets of the Song Dynasty, in collaboration with Li C. Tien, from March Street Press. Mayapple Press brought out his Open Communion: New and Selected Poems in 2005. Palen lives in Central Illinois. He retired from the Journalism Department at Central Michigan University in 2009. This is his first collection of short fiction.