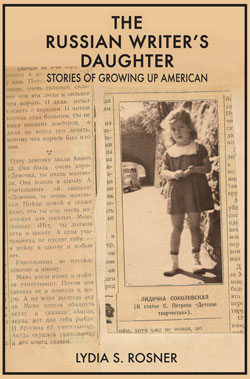 The Russian Writer’s Daughter by Lydia S. Rosner is a collection of lively autobiographical stories about growing up in a Russian-American Jewish household in the stifling political atmosphere of the Red Scare. At the center of these memories is Lyduce’s father, whose complex personality mixes a passion for social justice, the desire to protect his family, and intellectual snobbery. In this revelatory memoir, international politics shadow a child’s gradual awakening to her father’s humanity. As she tells her family’s story, Rosner shows how complicated autobiography can be, more a matter of pursuing the truth than asserting it.

selection from THE TRUNK
by Lydia Rosner

“I don’t know why you want to change the lining. It’s beautiful as it is,” said Mama. She looked at the trunk. “I really like what you did already. So why change it again?”

The inside of the trunk was a colorful assemblage of United States maps, available free at every gas station. Papa had pasted them down in such a way that no writing showed. There was not a bump or lump anywhere. The muted reds and greens and yellows of states and counties, intersected by green roadways and blue rivers, created an elegant lining that looked just like the expensive luggage on display in the windows of the better Fifth Avenue leather stores. “I like the way it looks. Why would you even think about redoing it?” she asked again. Papa noticeably paled.

“Alex called. From Broadway,” he said.

She turned to Papa, who was now back in his chair, the trunk out of sight. “So why did Alex call? What did he want?”

“He said he was in the phone booth on the corner in front of the Bermans’ stationary store and the New York Post headline says that Jack Sobel was just arrested.”

“Alex said the paper says Jack is a Soviet spy and they have been watching him and his friends, Myra and Jack Albin. He said it’s all over the papers, The Post, the News and the Mirror. He said that their pictures were on the front page of the Times. He’s bringing the papers. It says that they were part of a spy ring acting for the Soviets. It’s all over the news and he said people are talking about it in the store.” He sighed. “They’ve been watching them for ten years, Alex said the Times says.”

On Sunday, when Jonny and I came for dinner, the trunk was back in Mama and Papa’s bedroom. The shelves had been replaced. The drawers were back in their sequence. The wooden hangers hung against a drab brown-bag background. The drawer fronts sported brown under their shiny steel pulls. And there was an acrid smell in the house, as if paper had been burned, and the file of Papa’s writing in the living room was half as large as it had been.

Dr. Lydia S. Rosner Professor Emeritus of Sociology, has been on the faculty at John Jay College of Criminal Justice, City University of New York since 1985. Mentioned in Two Thousand Notable American Women, Who’s Who in America and Who’s Who in the East, Dr. Rosner has traveled the world with a keen interest in cultures and social structures.