Tales of the Tetragrammaton – Paul Nemser 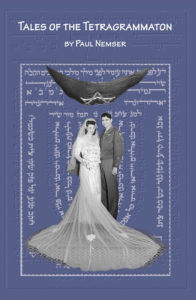 With Tales of the Tetragrammaton, poet Paul Nemser reaches into his own childhood memories to explore the mystery at the heart of ordinary life. It is at once an evocation of a Jewish family’s life in suburban Portland, Oregon in the 1950’s, with its bowling alleys, formica countertops, and TVs, and a search for meaning and transcendence in the spirit of Jewish mysticism—as if Borges had become a writer for Sid Caesar, or Kafka were the act following the Beatles on the Ed Sullivan Show.

Images cascade, paradoxes loom. Hovering over the ordinary world is the mystical name — the regulator of all events, the font of all language, the curator of the impossible, the determiner of lives and deaths, the ruler of all that is.

Praise for Paul Nemser’s work:
This wonderful book is about language as it creates the world, told in strawberry blintzes and the grinding of gears as the bus goes up a hill. The poet, Paul Nemser, is one of my favorites, for his lyricism and fiery strangeness, his mudslides, olives and jelly jars containing the name of God. – Valerie Stivers-Isakova

Praise for Paul Nemser’s Taurus – winner of the 2011 New American Poetry Prize.
Taurus is surreal and visionary, experimental and traditional, lyrical and narrative-all at the same time-and it is always strange and strangely compelling. In language that is vivid, fresh, and often startling, the book sets the myth of the abduction of Europa by Zeus against the demimonde of contemporary St. Petersburg. As it unfolds, the retelling becomes a metaphorical examination of the geo-political confusions of contemporary Russia-a love story on one hand and a story of desire on the other. – Andrew Hudgins

Taurus is the most accomplished first book of poetry that I have encountered in the new millenium. It is moving, tortuous, tragic, but without a trace of the tragic mask. There’s no denial in Taurus of the bleakness of our collective reality after September 11, but the imaginative energy has been channeled, converted, toward overcoming every immediate obstacle that stands in the way of a deeper revelation, which allows the language to ascend–amazingly–to a spiritual plane.” – Mark Rudman

The name took her to the lip of the ocean. It showed her the washup of jeweled fins and the murky commas of plankton swaying. It asked her if she felt like a moon jelly, and then she did. She felt her body’s graceful round contractions, and the pull of the blue-gray reef just offshore that made a blurp blurp when the shallow waves broke, as if a waiter were spooning protoplasm onto a faience platter.

The name never let on what it had in mind. “Do you have the gift of language?” She had always thought so, but this was the name, not a stranger at the neighboring hair dryer, not an eater of skillet burgers with the onions fried in, not a fellow transplanter of roses. Lying to the name was fruitless. Like trying to hold back the turning earth with its mausoleums and incubators.

She turned away from the name and faced the sea, knowing the name could see anything from any slant. It asked her if she liked fog, which it knew she did, and then the sun was a dim disk and the horizon was a herd of sheep running toward her, the moisture in their wool growing stronger in her nose, an overwhelming wooliness, which took away all of her other senses until the herd had passed, and rays began to angle through the clouds, and she smelled sea tang again and sand sweat, and there were moon jelly bodies everywhere, like round holes in the landscape, holes washed ashore and thinning there.

“What was that?” she asked. “It was death.” said the name. “Be careful where you walk. They still have stings.”

About Paul Nemser
Paul Nemser was born in Portland, Oregon. He received an AB from Harvard College, an MFA from Columbia University, and a JD from Boston University School of Law. In school he studied writing with amazing teachers, among them Robert Lowell, Elizabeth Bishop, and Stanley Kunitz. Nemser’s book Taurus won the New American Poetry Prize and was published by New American Press in 2013. In the 1970’s he co-translated two books of Ukrainian poetry: Antonych, Square of Angels (Ardis) and Drach, Orchard Lamps (Sheep Meadow). The Drach book, edited by Stanley Kunitz, won a PEN Translation Award. Nemser’s poems and translations have appeared widely in magazines. He lives with his wife Rebecca in Cambridge, Massachusetts, and Harborside, Maine.