The Kingdom Where No One Keeps Time – Helen Ruggieri 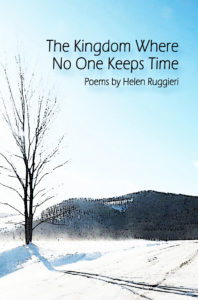 This book is about loss – parents, lovers, friends, pets, all those whose absence is felt strongly. Loss is approached through myth, through despair, through sensory detail like the empty hollow in the bed, or from the viewpoint of the shoes abandoned in the closet.

Twenty-five years ago Ruggieri wrote “no one I love has ever died.” This book looks at what time does to us all.

Praise for Helen Ruggieri’s work:
Ruggieri, with an intense regard for right diction and informing imagery, looks at those things that come her way – both from books and from her rural river town of Olean, NY – and saves them for us, saves them from passing into oblivion, saves their enduring values. She is an explorer, a discoverer, who sees the large worth in otherwise small things. – John Balaban

Reading Helen Ruggieri’s haunting meditations on the slow passing away of the things of this world, the “dusk geology measures,” is like finding the lovely delicate bones of a creature you hadn’t realized was long extinct. Again and again she reminds us to take note, to bear witness. Remember how beautiful it was to be here. -George Bilgere

The Kingdom Where No One Keeps Time

and in them
everything slows down
slower than seasons

a larger rhythm rocking us
in the arms of an old woman
soothing, hush, hush

until we arrive
in that crepuscular kingdom
where no one keeps time.

About Helen Ruggieri
Helen Ruggieri has an MFA in poetry writing from Penn State where she studied with John Balaban. She worked with the late William Stafford at the Atlantic Center for the Arts and at annual gatherings in the years following with members of the original workshop. She taught at the University of Pittsburgh, Bradford, PA for 20 years and currently teaches a poetry workshop for the African American Center for Cultural Development in Olean, NY, and coordinates the reading series at the Olean Public Library.

Ruggieri spent a semester in Japan at Yokohama College of Commerce and published a book of her experiences – The Character for Woman (Foothills Publications). She received a Sasakawa Fellowship for the study of Japanese Culture and studied at San Diego State University. Other books are Glimmer Girls (Mayapple Press), Butterflies Under a Japanese Moon (Kitsune Books), and The Kingdom Where Everybody Sings Off Key (Aldrich Press). She has edited an anthology of writings on the Allegheny River – Written on Water.

Her award winning haiku have appeared in publications in Ireland, England, Russia, Belgium, Japan and elsewhere. She has produced a video of the 14th Century Buddhist nun Abutsu, a trailblazer for women of her time.

Ruggieri studied tai chi for fifteen years and has two kung fu weapons – the fan and the bo staff. She is a master gardener.