The Man Who Loved His Wife – Jennifer Anne Moses 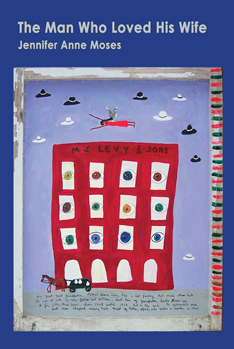 Jews being Jewish: that’s the subject of Jennifer Anne Moses’ new collection of short stories. Whether in Tel Aviv, suburban New Jersey, or the Deep South, the characters who populate the pages of The Man Who Loved His Wife grapple with God, their loved ones, fate, death, hope, Hitler, transcendence, and the 4000 year old history of Judaism. With a Yiddish sensibility born of passion, an eye for detail, and a deadpan sense of humor reminiscent of Singer, Salinger, and Tillie Olsen, Moses captures singularly Jewish and wholly human characters as they live and breathe through their stories. A secular Israeli loses his son twice, first to ultra-Orthodoxy and then to war. An elderly survivor of Nazism living in Baton Rouge, Louisiana, believes his dog to be the reincarnation of his long-dead sister. Meanwhile, in Queens, an adolescent boy mistakes love for magic and brings his family to the brink of catastrophe. Lovely, tender, and hard to put down, these are short stories that leave you yearning for more.

Praise for Jennifer Anne Moses’ work:
It started with Sholom Aleichem, and continued with Seinfeld, but few others writing today explore as profoundly the stress of childhood, adolescence, and parenthood on the second and third generations of East European immigrants—the Jewish family in its American incarnation—as Jennifer Anne Moses. Her craft and integrity shine as she digs for the truths that her characters try to hide. – Sol Gittelman – Professor Emeritus, Tufts University, and author of “From Shtetl to Suburbia: The family in Jewish literary imagination”

A holocaust survivor’s not-so-lucky sister returns to him in the shape of a Golden Retriever; a father’s rant about his fanatically religious son turns into a bittersweet eulogy; one of a series of tall-tales concocted to impress a girl lands the tale-teller’s father in jail; a brother confesses to his unsympathetic sister his fixation with a college crush best remembered for an episode involving a banana; a son struggles to quell the libidinous exploits of his nursing-home-bound mother … At their finest the stories in Jennifer Ann Moses’ The Man Who Loved His Wife have the wit, whimsy, and surreal wonder of Chagall paintings —but a dark, depraved Chagall whose angels are as deeply flawed as they are grittily earthbound. — Peter Selgin, author of Drowning Lessons and The Inventors.

The wonderful stories in Jennifer Ann Moses’ The Man Who Loved His Wife play the heartstrings like a harp, striking deep chords of pathos and passion to wild chords of hilarity. Seldom does such essential wisdom come in such an entertaining package. – Steve Stern, author of The Frozen Rabbi

From: “The Holy Messiah”
Religious, you say? What’s religious? And when there are so many shades, so many tones and semi-tones of religious, who really qualifies as merely religious and who, as a nut job? Especially here in the Holy Land, God help us, where you could argue—and you’d be right!—that pretty much everyone is a nut job. But I digress.

From: “The Uncircumscised”
Three months after his aging daughter Rhonda gave him a one-year-old poodle-Lab-golden-retriever mix to keep as a pet, Felder came to believe that the dog — who looked at him mournfully whenever he went to the bathroom and waited for him by the door, as still as a statue, until he came out — was in fact none other than the reincarnation of his sister, Esther, may her name be a blessing. Esther, who was seven years his elder and his de facto mother, had been taken to Bergen-Belsen during the war and had never been heard from since.

About the Author
Jennifer Anne Moses is a multi-genre author whose books include Visiting Hours, Bagels and Grits, The Book of Joshua (University of Wisconsin Press, 2018), Tales from My Closet (Scholastic, 2014), The Art of Dumpster Diving(Turner, 2020), and Food and Whine (Simon & Schuster, 1999). The Man Who Loved His Wife is her first collection of short stories. Her essays and short stories have been widely published and anthologized. She’s also a painter. She is the mother of three grown children, and lives in Montclair, NJ, with her husband of more than three decades and their two bad dogs. She can be found at JenniferAnneMosesArts.com.