The Other Place You Live – Jane O. Wayne 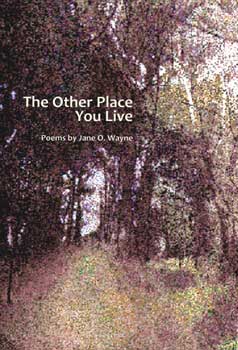 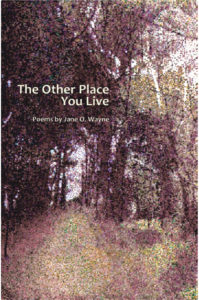 The Other Place You Live explores “the world’s slow unwinding.” With intensity of language and a bounty of imagery, she reveals those other places wherever she is in the world. The poems move effortlessly from metaphor to metaphor, gradually building an atmosphere of dark disquiet, then suddenly revealing, as by moonlight, the burnished joy at the heart of things. This is a book of serious riches and profound human pleasures.

As It Happens
by Jane O. Wayne

In a wide realm of refusals
where doorknobs fall off
in her hands and trains
pull away without her, the papery years
collapse as neatly as a fan

so she never reaches
the city circled on the map or sees
what the woman sees beyond
the open shoji screen
in the Japanese print.

But what would she change?
Not the marble floors
where she stands outside a painting,
a strange country,
a language she doesn’t know.

Nor the careless dream that falls
out of the night, like a coin
from an open purse:
the ship without a wake,
and the people on it no more
than silhouettes, throwing bread crumbs
overboard—

hers and not hers
to understand, not really. She tries,
but can’t get in
(blindness of the soul, she thinks),
eyes still closed, and how else
to get back to those streets
on the map she carries
in her heart pocket?

While she slept,
the orange lily folded up like an umbrella,
only drier, final too—
her own garden a place
where she can’t tell surprise
from violence.