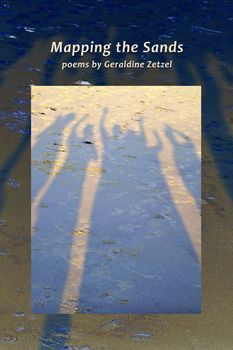 This book is a record, not so much of making life one’s own as of allowing it to emerge. Evoking the journey of a long life, Geraldine Zetzel’s accomplished poems express a potent, often playful imagination that reaches through strictures of propriety and convention to the bedrock of connection. This is mature work in a world where there is great thirst for it.

The Canyon, 1945
by Geraldine Zetzel

Five kids—wartime ranch hands
let off for a few days’ rest—
we go camping in Clark’s Fork Canyon.
The Shoshone runs muddy and loud
from the year’s late ice-melt.
Charlie and Jan, our best anglers,
casting, casting in long graceful arcs
for hours, but the trout never rise.
We survive on tinned ham, coffee
and bread, scare each other silly,
nights, with stories of rogue bears,
odd noises in the dark.

It must have been August 5, 1945.
Just about when they were briefing
the pilot and wheeling “Little Boy”
into the belly of the Enola Gay.

Giddy with hunger, the last day,
we struggle back out of the canyon
and wait by the side of the road
for the truck to come pick us up.
We sprawl in the shade and talk
about food. On the way back
to the ranch, the foreman tells us
the news they’d heard the night before—
speaking those words no one
had known till then: atomic bomb,
mushroom cloud, Hiroshima.

Unreal, the words, unreal
that the sun just goes on
stroking as usual the flanks
of the familiar mountains, that the tufts
of Indian Paintbrush keep on waving
scarlet in every ditch.

Not until later, not
until much later, when I see
the first images—shriveled husks
of bodies, blast-shadows
of bodies on walls—do I even
begin to understand. But what
did we ever understand?
That a whole city can be obliterated
in half an hour? That a river
can burst into flames?

They say a weed called Panic Grass
sprouted in the ruins a few weeks
after the blast, spreading green as acid
everywhere between the dead buildings.
Forgive us. By then we were busy
cutting alfalfa in the upper field,
raking it up before the next storm
could spoil the hay.

Geraldine Zetzel grew up in New York, Switzerland, and Washington, D.C. and spent summers in Austria and Wyoming. Her career was in teaching, teacher training, and child advocacy. In addition to poetry, she is active at the Harvard Institute for Learning in Retirement and with Cambridge at Home, an organization for seniors who choose to stay put as they age. The author of two chapbooks, Near Enough to Hear the Words (Pudding House Publications) and With Both Hands (Finishing Line Press), she is a student of Buddhism and lives in Cambridge, MA.

The Other Place You Live – Jane O. Wayne