a vision of corrected history with breakfast – Al Hellus 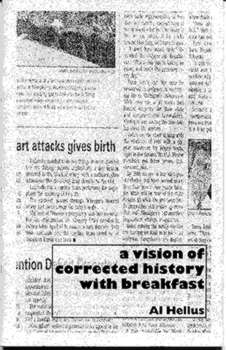 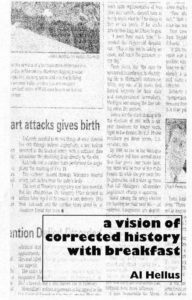 These are edgy, raunchy, funny and powerful poems.

a vision of corrected history with breakfast
by Al Hellus

the days’ casting call
includes newsbites on the radio
that could have happened
anywhere between the last fifty years
and breakfast, which is
a plate of poached headlines
& a cup of printer’s ink.

surely the second coming is at hand.

I stare out the window where, suddenly,
the Watergate hearings are once
again in session — a bearded Richard Nixon
is seating on the stand admitting,
finally, that he always was a crook, and

Joe McCarthy breaks down on television,
blubbers to the packed Senate chamber
about his obsession with
young communist boys
who spurned him in his youth.

on a warm Tuesday in Vienna, Hitler
is accepted into the academy of art.
ne becomes a mediocre painter
most noted for having dropped dead
at the Cedars Tavern next to Jackson Pollack
who kept right on talking to the
poor old bastard for half an hour.

his last painting,
a nude self-portrait
sells for thousands of dollars

Al Hellus (1958-2008) was an arts activist who lived in Saginaw, Michigan. a vision of corrected history with breakfast is his first book of poems.