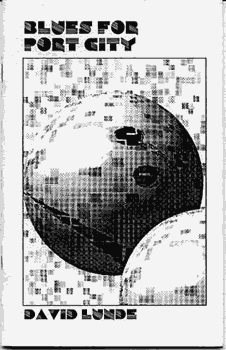 Science fiction poems which are truly science fiction and truly fine contemporary poetry, “written” by an inhabitant of the demimonde of a space station. Includes Rhysling-award winner “Pilot, Pilot.”

Your eyes were mirrors then,
silver as pressure domes, your
head raked back fifteen degrees.
The angle of your long neck
against the unwholesome horizontal
of that Port City street, the taut
cords of muscle straining
in my sweat-slick fingers,
are a senso I can’t erase–
neither that image nor the shame,
knowing even then it wasn’t you
I hated, brother, but myself, my life–
and at my back, suddenly, the laughter,
hurrying near, the great laughter,
and you beginning to, your lips
beginning to crimp at the edges
just a bit as if to smile–you!
smile!–and I stared hard
at your eyes–at, not into–
trying to scan His approach
and afraid, so afraid to turn,
as if by not seeing straight-on
I would not be seen. But I was.

That fearsome hand, irresistible
and deft as a waldo, slipped loose
my grip, set us apart by a meter,
you cursing weakly, rubbing your throat
where my thumbs had bruised it,
both of us weeping like children
caught in some infantile squabble,
pulled casually apart and forgotten,
while He cruised unruffled off,
murmuring, “Easy, grounders, easy there.”
Oh, easy, always easy for Him!
cruising off to His future,
off to His ships and His stars.

“But we made you!” I screamed,
and the fury was in me then, so huge
I flicked out blade and flung it
hard at His enormous back–
and how He did what He did then
I can’t tell you; I couldn’t see
but whirling flash and blur and hear
the shree-kaslam of its return.
Then He was gone. My blade
was buried to its hilt in a wall
of solid ferrocrete. The empty street
still echoed with His laughter.

I am not Arthur Pendragon
and have no hope. I suppose
I could have left Port City,
walked off those bitter streets,
but where is there to go
that matters? I can’t forget
the mirrors of your eyes,
how they could not frame
His fearful symmetry, how they
diminished and diminish me.

David Lunde has been Co-Editor and Publisher of The Basilisk Press, Contributing Editor of Escarpments, Managing Editor of Drama & Theater, and Poetry Editor of The Riverside Quarterly. He is the author of seven books and chapbooks of poems. His poems, stories and translations have appeared internationally in more than 250 periodicals and anthologies. After many years in Western New York, he moved to Oregon with his wife, the fantasy novelist Patricia McKillip.

a vision of corrected history with breakfast – Al Hellus