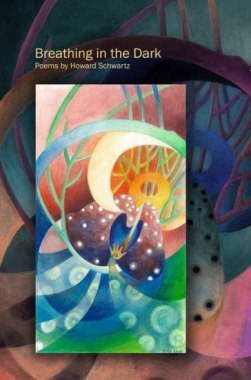 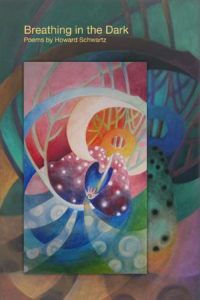 Howard Schwartz is a contemporary master of the parable, the short lyric and the tale. In Breathing in the Dark, he has multiplied his dreams, his myths, and his stories into poems that grow quietly and firmly from the secret root stock of his imagination. That side of Judaism and that side of poetry which is dream-like, mythical, and memory-ridden is Schwartz’s domain. Breathing in the Dark is a book of human tenderness, gentle humor, and more than a dash of mysticism. To read these poems is to enter a state of meditation in which the two worlds of ordinary life and that of spirit are combined.

Praise for Breathing in the Dark
Breathing in the Dark is a book of human tenderness, gentle humor, and more than a dash of mysticism. Howard Schwartz is a poet who has breathed in a lifetime of experience, and breathes out a lifetime of wisdom. To read his poems is to enter a state of meditation in which the two worlds of ordinary life and that of spirit are combined. – Alicia Ostriker, author of The Volcano Sequence.

I resist blurbs, but this book is something else. It distills such poetic wisdom and wry sly Kafkaesque twists and turns, it’s as if it comes from another time and place and yet is immediately relevant. Noted folklorist with a secret poet’s life, he opens it all up in this splendid gathering. Simple tale telling & dream-telling that gets to the core of mysteries. Clear and mysterious, ironic and accepting. Absolutely lovely.
– David Meltzer, author of David’s Copy.

Howard Schwartz is a well known and beloved poet, storyteller and anthologist, a student of myth, and prolific dreamer. His poems navigate between the hard truths of family and the fluidity of the dream. Schwartz has multiplied his dreams, his myths, his stories into poems that grow quietly and firmly from the secret root stock of his imagination. “Breathing in the dark” with Howard Schwartz, I feel I am at the place where words begin and end, and I am grateful to be there with him. – Rodger Kamenetz, author of The Lowercase Jew.

Howard Schwartz is a contemporary master of the parable, the short lyric and the tale. In his new book, Breathing in the Dark, he has found a way to balance the communal and autobiographical, the family and the tribe, dream and waking life with his passion for forms that explore the fabulous. Here are sacred words passed down to us from our parents, who are prophets and seers. The poet connects our ancient past to contemporary life, the lyricism of the psalms to the words spoken by a father to his son, the songs of David to the voices of Coltrane and Amichai. Breathing in the Dark opens a new chapter in an already distinguished poetic career. – Jeff Friedman, author of Taking Down the Angel.

The first time
I went on a quest
for forbidden fruit.

The second time
I built an ark
and tried to get there by sea.

The third time
I came in search of my ancestor,
Abraham.

If the sun was hidden
I let the stars
guide me.

If the tablets were broken
I carved
new ones.

In the future
my bones
will roll to that city.

Last night
I dreamed
I was swimming there.

Howard Schwartz is the author of four books of poems, Vessels, Gathering the Sparks, Sleepwalking Beneath the Stars, and Breathing in the Dark. He is also the co-editor (with Anthony Rudolf) of Voices Within the Ark: The Modern Jewish Poets. His other books include Tree of Souls: The Mythology of Judaism, which won the National Jewish Book Award in 2005, and Leaves from the Garden of Eden: One Hundred Classic Jewish Tales, published in 2008.

Howard Schwartz has been quite a force in the world of poetry. The noted editor of Voices Within the Ark: The Modern Jewish Poets has already made his mark with many works edited and written. And now this lovely mystical book with its epigraph from Rabbi Nachman: “Through breath the world was created.”

The title poem sets the tone for the entire book:

While you sleep, .
an angel whispers the secrets of creation,
showing you
every branch of the tree of life.

And this is what Howard Schwartz sets out to do:

You wake,
a lilac
waiting for the wind,
a sensual stone,
a leaf
thirsty for a kiss.
From now on
you will wake with this thirst
every morning
and drink in everything
until the crickets rub their wings together
singing

The “you” is left ambiguous here. Is it the poet’s self? The reader? Everyman? This adds to the mystery of the work.

But Howard Schwartz is a Jewish poet, and, as such, also shows us he has his feet firmly planted in reality. There are a number of poems about family and friends that have nothing to do with the mystical, which I found less successful, rather chatty, prosaic. “My Father Had Many Professions” for instance:

My father had many professions,
all at the same time—
watchmaker
jeweler
antique dealer—
first at every estate sale.
Once in a while I went with him,
saw him bargain
and barter,
try to eke out
a few bucks.

He is best at interweaving the mystical and the quotidian. In “Spirit Guide,” a grandmoth­er from the other world visits her granddaughter:

Kissing her forehead,
touching her hair,
Savta stays close by.
You’re here
and I’m here, she whispers,
but I will always be with you.
Among the secrets she reveals:
journey like a river,
sing like a sweet bird,
let the angels in.

Of course, if you don’t believe in angels, you will probably have a little trouble with half the book. Fortunately, there are some beautiful, lyrical poems in this collection that are spiritual, but not particularly Cabbalistic. There is, for ex­ ample, the lovely poem to his grandson as they traverse a forest together:

Child
of my child,
I take you for a walk in the forest.
Your hand in mine,
I feel like a creator
as I reveal this world
of shadows and light
to you.

“Shadows and light.” This sums up my impression of “breathing in the dark.” We all know what shadows are, and we know what light is. Howard Schwartz in BREATHING IN THE DARK gives them new nuances, new feelings, breathing a spir­itual breath into them. The author is genuinely steeped in cabbala, but you don’t have to be a cab­balist to read them. Like mythology in Yeats, the imagery of the holy book serves this poet well.
— Nikki Stiller – Home Planet News – Issue 66 (Vol.18 No.1) winter/Spring 2013