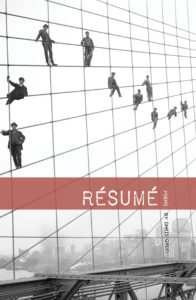 Chris Green’s Résumé sees life as a series of jobs: pimp’s assistant, lost pet psychic, petting tent attendant, target changer, aviary security, etc. Any job is both unspeakably ordinary and mercilessly strange—stock broker or pimp’s assistant, the same. And here, slipped between poems of work, a series of “Jobless” poems reflects a recurring state of being. Also in the book, poems about the jobs of vital relatives—in Green’s family, mangy is not a bad word—all of them with perfectly strong legs, all chasers with nowhere to run. In the end, the work of poetry becomes a refuge in Résumé—a stillness at the end of the day.

The poems are a well-rounded account of actual events and work to provide reasoning for life’s whimsy…Résumé suggests rewards of infinite possibility if you’re willing to work for it.

These poems are alive with dark humour and profound wit. And knowing, Chris Green knows stuff, he knows the emotional toll paid by those that toil.

Praise for Chris Green’s work:
This a wonderful cycle of poems. As Studs Terkel once wrote, “Work is about a search for daily meaning as well as daily bread, for recognition as well as cash, for astonishment rather than torpor; in short, for a sort of life rather than a Monday through Friday sort of dying.” Through the vehicle of various jobs, roles, labors, and employments–manual, artistic, emotional, literary, familial, etc.–Chris Green gives us a lyric tour of human complexity, oddity, behavior and occupation. He has a novelist’s powers of observation. Résumé is full of humility, wit, smarts and heart, and all kinds of quiet astonishment. Studs would have loved it. — Amy Gerstler

These clear-eyed yet inventive poems about work offer a hard-won wisdom that lifts us above suffering to understanding. Green’s is a marvelously spare and colloquial voice with the kind of detail that cherishes and transforms our lives, that compels us with the authority of experience. His material is his own and others’ brutal and toxic jobs, which in the hands of such a skillful poet, provide a vision that reaches beyond the subject to his spare but complex epiphanies.
— Christopher Buckley

Working odd jobs going nowhere, the fear of futility, the problem of money, the uncertainty of life—such are the burdens of youth. In Résumé, Chris Green resurrects and transforms such lost periods of life. He sees that every job teaches, affirms that even the lowliest job is a step. Résumé is not merely a record of employment— it is art employed so that human dignity can be redeemed through understanding and wisdom. — Richard Jones

The young attack and the poor pygmy goat’s
eyes roll back—his fur buffed to a scar.
I’ve seen real tears fly out of a donkey’s skull.
Flinching heroic rabbits (unselfing themselves)
smothered dead by toddlers. They morph into
my grandmother in her cancer bed.
I stroked her hand as she said, “I’ve never
been more scared.” Parents over-love,
their natures cry out—they push and butt,
demand their children to the front.
Wedged as we are between sheer cuteness
and the macabre, I lie to the lamb,
“Everything will be okay,” but hurt
becomes her, and the raucous people tug
at softness. I could say everything
in the end is suffering, even love.
I tell a hysterical child there’s nothing to fear.
Here’s the little white goat (little white ghost).

Chris Green is the author of three books of poetry: “The Sky Over Walgreens”, “Epiphany School”, and “Résumé”. His poetry has appeared in such publications as Poetry, New York Times, New Letters, Verse, Nimrod, and Black Clock. He’s edited four anthologies, including “Brute Neighbors: Urban Nature Poetry, Prose & Photography”, and the forthcoming “I Remember: A Poem by Chicago Veterans of War”. He founded LitCity (www.litcity312.com), a comprehensive literary site for Chicago. He teaches in the English Department at DePaul University. www.chrisgreenpoetry.com