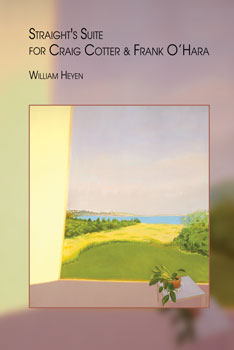 The 52 lyrics that make up William Heyen’s newest collection of poetry are at once a nod to the progenitor of American poetry of sexuality and the body, Walt Whitman, and a communication addressed to the late Frank O’Hara, famed member of the New York School of poets in the 1950s and 1960s. In his 1959 Personism: a Manifesto, O’Hara describes a poetry that “address[es] itself to one person (other than the poet himself), thus evoking overtones of love without destroying love’s life-giving vulgarity.” In this Suite, we often find Heyen addressing his lines to O’Hara, drawing on memory and hearsay to probe the intersection between O’Hara’s sexuality and his aesthetic. Heyen asks O’Hara how “I might get my poem to be its subject,/ not just be about it,” which in some ways is the project of all art.

Frank, you’ve got me wondering how
I might get my poem to be its subject,
not just be about it, if it ain’t now.
I keep hearing a frog going ribet, ribet,

all night, not exactly singing but,
yes, communing with its fellows. See it
where a snapper is about to interrupt it.
Eight lines, a green meal, no frog esthetic.

William Heyen lives in Brockport, New York. A former Senior Fulbright Lecturer in American literature in Germany, he has won prizes and awards from the NEA, the John Simon Guggenheim Foundation, and the American Academy & Institute of Arts & Letters. His poetry has appeared in the Atlantic, the New Yorker, Harper’s, The Southern Review, American Poetry Review, and in hundreds of other periodicals and anthologies. His Crazy Horse in Stillness won the Small Press Book Award in 1997, Shoah Train: Poems was a Finalist for the National Book Award in 2004, and A Poetics of Hiroshima was a Chautauqua Literary & Scientific Circle selection for 2010.