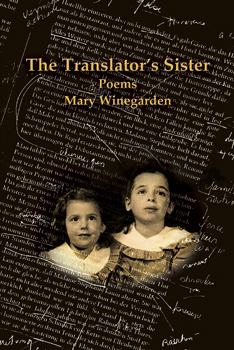 In response to the unexpected death of her sister Katharine Washburn, Mary Winegarden has taken on the challenge of translating their lives into living language. Using phrases from Washburn’s work as her foil, Winegarden creates a moving meditation on the bonds of sisterhood. Crossing boundaries between prose and poetry, fiction and memoir, convention and experimentation, The Translator’s Sister resonates with the intimacy and humor of remembered details, with loss translated into art. This shimmering conversation will sweep you in.

Mayapple Press is pleased to announce that Mary Winegarden’s The Translator’s Sister has been awarded an American Book Award by the Before Columbus Foundation . Read more about the award

Praise for “The Translator’s Sister
It is rare to find a poem so captivating you can’t put it down. On the borders between memory and imagination, Mary Winegarden’s conversation with her dead sister shape-shifts and shimmers. Through the fractures in her dreams, she conjures brilliant glimpses of a shared childhood: the colors and smells of times past; gleeful secrets; a forest of loss. – Lucy Goodison, author of Moving Heaven and Earth: Spirituality, Sexuality and Social Change.

These inventive poems are alive with the urge to document, with love and its powerful complications, with loss translated into art. They play out their melody-and-counterpoint in the zone where the interest and particularity of the personal kick over into Everyreader’s life, and griefs, and healings. – Jeanne Larsen, author of Why We Make Gardens (& Other Poems)

Katharine Washburn was an accomplished poet, translator and classicist when she unexpectedly passed away at 57. In The Translator’s Sister, Mary Winegarden, her sister and also a poet, beautifully takes on the remarkable Herculean challenge of translating her life, actually their lives, back into the fabric of rhythmically rich and living language. Skillfully using phrases from her sister’s work as creative foil, Winegarden engenders a vision in which the two emerge through a classic dysfunctional 20th century American family (half Jewish/Irish American), the 1960’s political/psychedelic/college/literary world, and the fractures & challenges of their own new families and adult lives. The intimacy and humor of remembered details is exquisitely presented. No “sifting through ashes,” The Translator’s Sister is a resonant rhapsody for the corporeal present now past. – Stephen Vincent, author of Walking Theory

from “The Sister’s Apology”
by Mary Winegarden

The book you want

our lost book, I can’t find it

is no doubt somewhere in the house

our conversation can begin there
(I’ll happily invent)

the only happiness Tolstoy allows
in a fallen world

unless you come out
from behind
the trees of the dead

that sad pair of
shadows the company I keep

you see how I
read and re-read, scrutinizing
your words, those pages
you’ve left me—dressed up
now in italics

try to make sense of this story

Mary Winegarden grew up outside Washington, D.C. After graduating from the University of Chicago, she worked for several years in community arts in London, and then moved to San Francisco, where she earned her M.A. in Comparative Literature. Mary Winegarden’s translations of Russian poets have been published in Magazine and in Crossing Centuries: An Anthology of Contemporary Russian Poetry (Talisman House). Her poems have appeared in the journal 26. She teaches English at San Francisco State University, and is working on a new collection of poetry, Chiasmus. She lives in San Francisco with her husband, actor Geoff Hoyle.

Her sister, Katharine Washburn, was a critic, editor and translator of poetry from classical and modern European languages. She co-edited World Poetry: An Anthology of Verse from Antiquity to Our Time as well as Dumbing Down: Essays on the Strip-Mining of American Culture and Tongues of Angels, Tongues of Men: A Book of Sermons. She was also the acclaimed co-translator of Paul Celan: Last Poems. Ms. Washburn was on the editorial staff of the Book-of-the-Month Club. She had been working on her first novel, The Translator’s Apology, when she died in March, 2000.