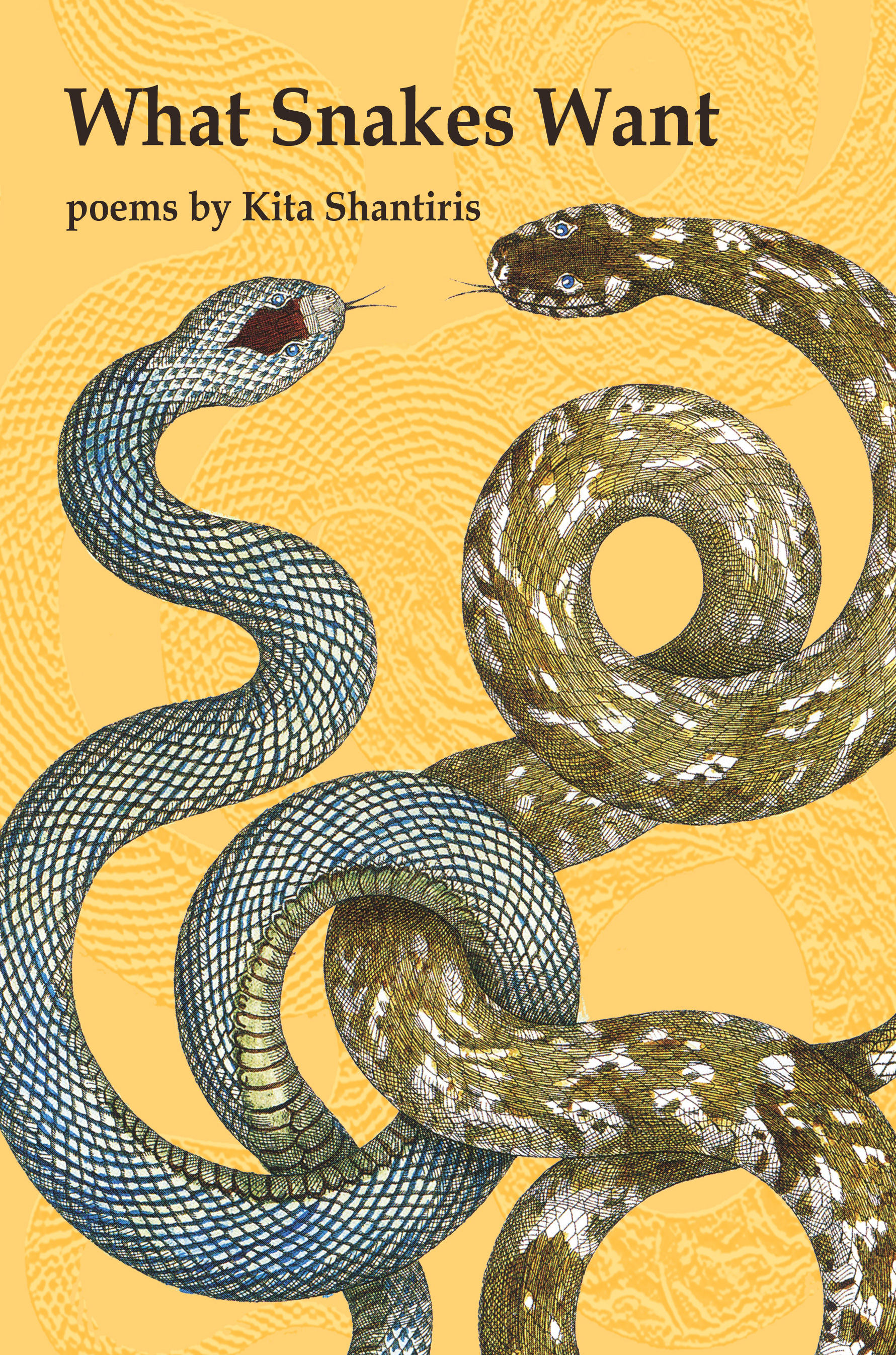 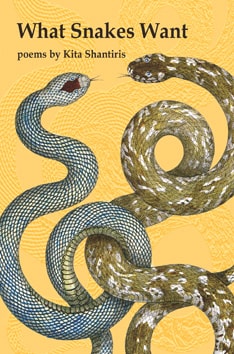 What Snakes Want is also available on Kindle

Slyly sexual, intense and funny, in What Snakes Want Kita Shantiris strips secrets of their power by telling them. Running away and returning, burying and unearthing, she—and a cast that includes abused siblings, desperate spinsters, and an army medic—struggle to escape their shadows. Throughout, Shantiris’ startling use of language animates her portraits.

A psychologist who runs a non-profit mental health center, Shantiris faces trauma, yearning, love and loss head on. What Snakes Want traverses a menacing, bleak landscape as its characters shed their ghosts. Sensuous love poems follow. Full of word play and mischief, never have oranges, or the word “dictum,” been racier. The haunting elegies in the final section breathe life into the dead.

Fearless and compassionate, What Snakes Want shines light in our dark places. You will return to these haunting poems again and again.

Something edgy and intense haunts Kita Shantiris’ poems, always threatening to flare up just outside their frames. Like a great auteur, she teases us with implication, with slow builds, the sneaky reveal, with what you can’t yet see. Or, she’ll give us a flash of aftermath, letting us glimpse “a tub of red water” where the violence has already taken place. Carefully orchestrating her pace, Shantiris lets things dawn on us, which contributes to the sense of delicious discovery one has in reading this collection. Wanderlust, an ode to coffee shops, an erotic poem set in a gaudy Laundromat, a child lying in bed hearing her abusive father come home…it’s all here, articulate, compressed, suspenseful. “It takes brandy to center me/glowing alone here.” The reader will likely find herself glowing along with these poems. – Amy Gerstler, author of National Book Critics Award winner Bitter Angel and other collections

Kita Shantiris is a poet whose work in this book glows with a naked, scalpel-sharp intelligence and a refreshing delight in language. Full of startlingly good poems—“The Last Lake” comes to mind and the title poem, especially—What Snakes Want is a fine collection, and one of the most exciting I have read in recent years.
– Patrick Chapman, poet, writer and screenwriter—including A Promiscuity of Spines: New and Selected Poems

One could spend a lifetime with Kita’s new and powerfully personal book of poetry, What Snakes Want. The poems speak of a life replete with love, loss, pain, honesty, insight, longing, sensuality, and a deep unabashed unsentimental appreciation for the very gift of life itself. The poems are accessible yet abound with rich imagery, beautifully wrought observations of the natural world and of our very human behavior, and they do so with an intensity of feeling and care that ultimately resound with hope as they reach in and touch the soul. – Ed Harris, actor, screenwriter, director

I’m looking for a photo of you from Burma.
One that was shot after combat.
One where your cheeks are lined
with sweat and fear like the treads
tanks make driving through mud.

Deep in the jungle, I’m looking for a way
to forgive you for the monsoons
and all you leeched from us.
Something to illuminate
the explosions that followed.

A way to forget all the nights
I pretended my bed was a ditch
and sleep had already killed me.
A way to forget you brooding in the doorway
like a panther in one of your war stories.

Someone inside me kept watch
while you taught us to make bedrolls
the way they taught you in the army.
If I didn’t learn quickly, you might strike
with your unpredictable paw.

You waged hand-to-hand combat
with the furniture and anyone big enough
to question your authority.
Now you are a prisoner
of your wheelchair.

I’m going to push you as fast as I can.
It’s time you knew how it felt
when you gunned that blue Ford to ninety.
You’re not driving anymore.
You’re mine for interrogation.

About Kita Shantiris
Published in the U.S., Ireland and England, Kita Shantiris’ poetry has appeared in Ambit, Crannóg, Poetry, Quarterly West, The Fish Anthology, The Moth, Slipstream, Wisconsin Review and other journals. One of three poets featured in The Border (Bombshelter Press 1984), she also had two poems anthologized in The Faber Book of Movie Verse (Faber & Faber 1993). In 2012, Kita received 2nd Prize in the Ballymaloe International Poetry Contest judged by Leontia Flynn. She twice has been Runner-Up in Fish Publishing’s contest judged by Brian Turner (2011) and Ruth Padel (2014). In her other life, psychologist Dr. Kita S. Curry runs a non-profit mental health center in Los Angeles where she has been honored for erasing stigma and bringing services to communities of color. Her website is www.kitashantiris.com.