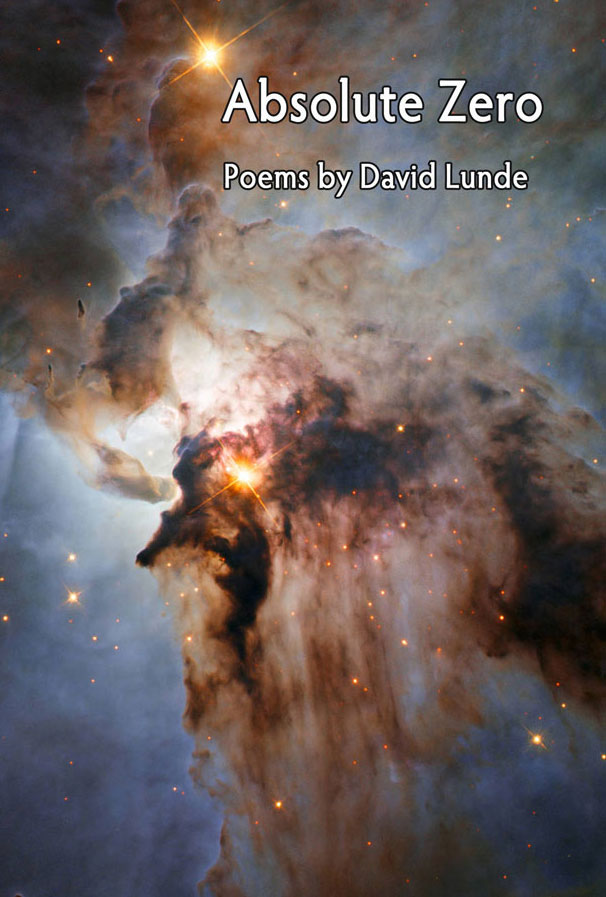 Absolute Zero by David Lunde is available on Kindle here

Veteran poet David Lunde’s newest work, Absolute Zero, paints an always fantastic, often tender, and occasionally frightening portrait of humanity’s place among the stars. Lunde has a gift for distilling great expanses of time and space into a single poem, an ability that makes sitting down with his work feel like strapping in for an intergalactic journey. Throughout the voyage, Lunde finds a strange humanity in both the cosmic and the microscopic: black holes resemble Shakespeare characters, subatomic love stories rise out of quantum foam, and stars live and die just like us. Whether exploring bacterial empires or brewing the first beer on Mars, Lunde’s cerebral verses are always delivered with a remarkable humor, wit, and charm that is sure to satisfy science fiction devotees and poetry lovers alike.

If you are looking for imaginative and insightful speculative poems rich in science and science fiction, you’ll find a mother lode in this collection
. I’ve been reading David Lunde’s work for more than thirty years and he never disappoints. Absolute Zero may be his best book to date and is certain to be an Elgin Award contender. My highest recommendation.
– Bruce Boston, SFPA Grandmaster

These poems are the stuff of wondrous speculations light and dark that I grew up reading as novels. Indeed, some were first published in the 90’s era of the fantastic specialty presses. If you weren’t reading SF at that time, you can get a good idea by enjoying this collection. Lunde’s poetic legs are long, spanning universes with lines like these:
“No man can ever go where the deep ships go,
we curse our human flesh that bars the way,
and stare at stars that we can never know.”
– Port City Lament

Both science fiction and poetry, the one textually reductive, the other thematically expansive, proceed by metaphor. They find crawlspaces between what we think we know and the fullness of experience, crawlspaces where for a time we can dwell in wonder at the beauty, diversity and mystery of the many worlds that inhabit us. Dave Lunde knows those worlds, and that mystery. Each of his poems is a story, a small engine.
– Jim Sallis

The Soup of Stars: or Why I Write SF Poetry

So many years of sending
like small boats these poems
folding them and setting them adrift
like Li Bai on the endless river,
wondering how many years
they may sail the benighted abyss
before docking again into light
if ever, and meanwhile pacing
like an ancient Chinese lover
back and forth, scratching my head
and starving…

and then the stars spoke—
as the sun did to Frank O’Hara—
saying, “We think you’re a stellar poet,
Dave, we like your trajectory,
but you need to put us in your poems
like bright carrots in a soup.
Let us guide you like a rudderless sailor
home to the bubbling hearth!”

“Poems about stars?” I mumbled.

“By Jove, I think he’s got it,”
said Betelgeuse. “I don’t know,”
muttered Aldebaran, “he seems
a couple orders of magnitude
below lightspeed on this.” “Be real, Al,”
said Procyon, “how much can you expect
from an organic?”

That didn’t worry me.
I had critical calluses
not even a neutrino could penetrate.
But the idea was weird enough
to interest me, so I began to begin,
and the stars led me to the magazines
of Stardock, and alien ships
sought me out, and the ether pulsed
to the impress of my words,
and just like Shakespeare
I lived forever.

About David Lunde
David Lunde graduated from his post-graduate studies at the University of Iowa Writer’s Workshop at the top of his class and received the Academy of American Poets Prize. He had been supporting himself and paying his tuition by inking charts and graphs of information received from instruments launched into space by JPL for Dr. James Van Allen, director of the Physics and Astronomy Department. Immediately after graduating, he was offered a teaching position in English and Creative Writing at the State University of New York at Fredonia, where he taught for 34 years. He is the author of nine books of poetry and co-translator of five collections of Chinese poetry, one of which won the PEN USA Translation Award. His poems have been published in 34 anthologies and in several hundred magazines. Mayapple Press has previously published The Grandson of Heinrich Schliemann & Other Truths and Fictions (2014), Instead (2007), and Blues for Port City (1995).